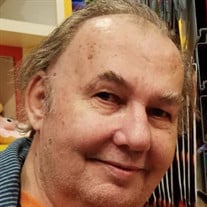 William “Bill” Perry Thomas passed away surrounded by family on 12/30/2021 at Flagler Hospital, St. Augustine, FL at the age of 73. William Thomas was born in the City of Detroit, MI on September 9th, 1948. He was the second child of Ruth Fisk and Robert C. Thomas. Bill grew up loving water, his parents had a cabin and he spent many summer days swimming, and water skiing on the lake. He graduated from Benjamin Franklin High School in Livonia, MI where he met his true love, Lula Geanell Hubbard. After graduation he worked for Michigan Bell as a linesman. During the Vietnam War he was drafted into the Army on April 29th, 1968, completed boot camp in Fort Campbell, KY and was stationed in Oklahoma. His daughter Lisa arrived 10 days before he was sent overseas. Because of his background, he was sent to the DMZ, the border of South Korea and North Korea instead. There he worked on telecommunications and was directly exposed to Agent Orange. Lori Arrived in 1971 after he returned to the states. He officially received his honorable discharge in 1974. Bill continued working for Bell South and AT&T as a systems Architect where he designed system programs. William was a hard worker, but his true love was for his family. He enjoyed traveling, photography, billiards, and books. He was a huge Star Trek fan and loved sci-fi and B-Movies. He spent countless hours lost in the magical realms of Harry Potter and Lord of the Rings. William leaves behind his loving wife Lula, Daughters Lisa Geanell Fret (St. Johns, GA), Lori Lynn and husband Michael Holtzman (Middleburg, FL); Grandchildren: Nicholas (Dalal), Michael, Sydney, and Spencer; Great-Grandchildren Noah, Joseph, and Elias. His siblings Robert Jr., Patricia, John and Daniel. He was preceded in death by his father Robert Sr., mother Ruth, and brother Jimmy. “To the well-organized mind, death is but the next great adventure.” Albus Dumbledore Condolences may be sent to: The Family of William P. Thomas 4146 Spring Creek Lane, Middleburg Fl, 32068 St. John’s Family Funeral Home is in charge of the arrangements.

The family of William Perry Thomas created this Life Tributes page to make it easy to share your memories.

Send flowers to the Thomas family.