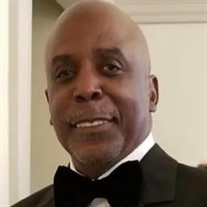 William ”Wine” Simmons, 62 of Saint Augustine, Florida originally from the empire state of New York passed away on November 28th, 2020 after valiantly battling COVID -19. William Simmons was born on February 25th, 1958 to Harriet Curry who became Harriet Byas after marrying Victor Fredrick Byas whom William knew and loved as “pop”. He attended both Brooklyn Tech and George W. Wingate which he graduated from in 1976. He went on to study at Cheyney State where he continued to pursue his love for numbers which he was innately brilliant at. Additionally, he was deeply dedicated to the Cheyney State football team whom he often referred to as the “Wolfpack”. He was even honored at the Historically Black College by being inducted into their hall of fame due to his athletic passion. Whilst pursuing his higher education William welcomed his first child into the world, Ralph Bailey. In later years they eagerly awaited father son bonding moments during “football Sunday”. William spent some time in the reserves with the military. However, his love for numbers could not be stopped. He ultimately settled in a career with the Department of Treasury where he met many co-workers who became family. Throughout his career, he broke many barriers as he was the only African American in his position, in his field, on the entire East Coast. This is a fact that he was always proud to mention. William loved the dance floor and that is how he met his late wife Allene Leslie Walker Simmons who he later wed in 1986.Through their union his daughter whom he affectionally nicknamed “firstlove” Aria Simmons was born. After his late wife’s passing he navigated the role of a single father triumphantly. William carried many titles, but father and “Pop Pop” were the ones he was most proud of. After Allene’s passing he married Carol Mcquillar where they resided in Mount Vernon, New York. William was a man who could not sit still. He participated in martial arts, coaching youth football leagues, selling custom merchandise, exploring real estate, publishing books etc. As a retiree he headed the Murabella fitness club for his subdivision and ran for local office. In fact, he was re-elected shortly before his passing. In his last months William had taken up fishing, eating fine cuisine (especially imported seafood), frequenting the gym, wine making and a zest for travelling with his companion Karen Anderson. William was predeceased by Allene Leslie Walker Simmons (wife), Harriet and Fredrick Byas (mother and father), and Edward Curry (brother). He is survived by Ralph Bailey (son), Aria Simmons (daughter), grandchildren Rakeem, Christopher, Zion and Zailynn, Robert Curry (brother), Carol McQuillar (wife) April Kirkland (sister), Olivia Amosun (sister), nephews Akuze Simmons, Dimitrius Simmons, Chad Curry and nieces Katrina Barnes, Simone Freeman, Majesty Amosun, Dawn Simmons and life companion Karen Anderson. As well as a host of cousins, godchildren, friends, neighbors and community members. William will be deeply and inexplicably missed. When he gained his wings, many hearts were emptied. He’d always say “I love you as much as you love me” and there is no limit to the love he gave and received. May he rest in eternal peace and continue to shed his love on others. Those unable to attend can view the service live streamed at https://iframe.dacast.com/b/156599/c/iframe.dacast.com/b/156599/c/549019

The family of William Simmons created this Life Tributes page to make it easy to share your memories.

Send flowers to the Simmons family.