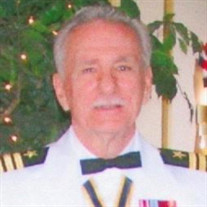 Commander William “Bill” Roberts, U.S. Navy (Ret.), age 88, of St. Augustine, passed away on September 17, 2021 at Flagler Hospital. He was born to Daniel Burtram and Esther Wilson Roberts and grew up in Los Angeles, California. The Korean War had begun as he was graduating from high school, and in 1950 Bill joined the U.S. Navy where he trained as a Mineman, which included diving and underwater demolition. He received extensive training in mines and torpedoes, quickly rising through the ranks as he received many commendations for his service. He served multiple tours in the Vietnam War and continued his career for 30 years, retiring with the rank of Commander. During his retirement Bill pursued many interests with the same commitment and work ethic from his military career. This led to many adventures including underwater gold mining in the American River, where he was able to use his military diving experience. In 1991 he and his wife moved to Florida where they enjoyed a very active retirement. An accomplished genealogy researcher, he was a member of, and volunteered his talents to the Sons of the American Revolution. He also volunteered with the St. Johns County Sheriff’s office where he served as a consumer advocate. Most recently, his proudest accomplishment was becoming a member of the Ashlar Masonic Lodge and had been serving as their chaplain. In addition to his parents, he was preceded in death by the love of his life Josephine, stepson Justin and his sisters Corrine and Pleza. He is survived by his son Bill Roberts and his wife Amy of Apple Valley, California, his stepdaughter Carol-Anne Taylor and her husband Iain Taylor of Drymen, Scotland, grandchildren Ethan, Crystal, Brittney, Justin and Grace; and 6 great grandchildren. Interment with full military honors will be held at Arlington National Cemetery at a later date. St. Johns Family Funeral Home is in charge of arrangements.

The family of Commander William Albert "Bill" Roberts USN (Ret) created this Life Tributes page to make it easy to share your memories.

Send flowers to the Roberts family.