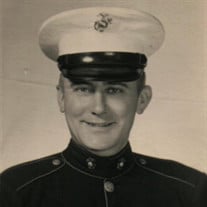 William Anthony Polaskey Sr., 91, passed away Monday May 3, 2021 at his residence in Symphony at St. Augustine. He was born in Riverhead, New York to Anthony Charles Polaskey and Frances (Kazaroski) Polaskey. He attended local schools and received his high school GED while serving in the Marine Corps. He married Antoinette (Pantaleo) Polaskey August 20, 1950. Upon completing his military service, he worked as a salesman for Singer Sewing Machine Corporation, Hazeltine Corporation, and as a Storekeeper for Grumman Aerospace Corporation until his retirement in 1991. They moved to St. Augustine, Florida the following year and have resided here since. They have two children, William Anthony Polaskey Jr. and Lisa Anne Stocki, four grandchildren, and nine great-grandchildren. Bill was an avid hunter, trapper, and fisherman who loved the outdoors. He raised chickens and homing pigeons and enjoyed watching horse races and NASCAR. He was a Catholic altar boy as a youth and a member of the Masonic Lodge of Riverhead, NY for many years. Upon moving to Florida, he actively participated in a leadership role in the Grumman Retiree Club in St. Augustine. William is survived by his wife of 70 years, Antoinette; son, William (Ellen); daughter, Lisa Stocki (Eddie); grandchildren, Krystina (Michael), Alexandra, Jessica, and Jennifer (Kristopher); great-grandchildren, Emily, Joshua, Elizabeth, Alivia, Merrick, Hope, Jaedyn, Leyla, and Mikey. He was preceded in death by his parents, Anthony Charles and Frances; sisters Dorothy and Dolores. A Memorial Service with military honors will be held Wednesday, May 5, 2021 at 2:00 PM. EST at Anastasia Baptist Church 1650 A1A South, St. Augustine, Florida. For those unable to attend, a livestream will be available through the family’s Facebook page. St Johns Family Funeral Home & Crematory is in charge of the arrangements.

William Anthony Polaskey Sr., 91, passed away Monday May 3, 2021 at his residence in Symphony at St. Augustine. He was born in Riverhead, New York to Anthony Charles Polaskey and Frances (Kazaroski) Polaskey. He attended local schools and... View Obituary & Service Information

The family of William Anthony Polaskey created this Life Tributes page to make it easy to share your memories.

Send flowers to the Polaskey family.