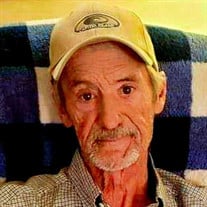 William Nathan Keen, age 61, of St. Augustine, passed away on March 3, 2021 at the Bailey Family Center for Caring. Nathan was born and grew up in Lake City, Florida. He joined the US Marine Corps right out of high school, trained at Paris Island, and honorably served his country. After his discharge from the Marines he went to work in the tree service industry. He learned the business from an uncle and worked in Lake City and Georgia. He founded K&S Tree service in the early 1980’s and was a contractor for the City of St. Augustine and customers all over the county. During his career, he followed the path of many hurricanes helping his customers retore their lives. He had a big heart and often helped people free of charge. He successfully ran the business for 35 years. Nathan enjoyed the simple pleasures in life, listening to music, sitting by a fire with friends. More than anything in life he enjoyed spending time with his family and especially his grandchildren and was looking forward to the birth of his fifth grandchild. He will be deeply missed. He is survived by his wife, Mary E. Keen of St. Augustine; sons, William N. “Will” Keen, Jr. of Gainesville, Jonathan W. Keen (Celeste) of California; a daughter: Heather Nail (Justin) of North Carolina; his mother, Mary Darley (James) of Lake City; sisters, Mary Land (Richard) of Lake City, Lynn Harrell (Jason) of Jacksonville; a brother, John Arthur Keen (Joe Herman) of St. Augustine; and grandchildren, Madilynn, Brantley, Oakleigh, Henry and one on the way. A visitation will be held from 1 to 2 pm, with a funeral service at 2 pm on Monday, March 8, 2021 at St. Johns Family Funeral Home with Rev. Mike Norman officiating. A graveside service with military honors will be held at 10:30 am on Tuesday, March 9, 2021 at Jacksonville National Cemetery. Like a rock, I was strong as I could be, Like a rock, nothin' ever got to me, Like a rock, I was something to see, Like a rock – Bob Seger. St. Johns Family Funeral Home is in charge of arrangements.

William Nathan Keen, age 61, of St. Augustine, passed away on March 3, 2021 at the Bailey Family Center for Caring. Nathan was born and grew up in Lake City, Florida. He joined the US Marine Corps right out of high school, trained at Paris... View Obituary & Service Information

The family of William Nathan Keen created this Life Tributes page to make it easy to share your memories.

William Nathan Keen, age 61, of St. Augustine, passed away on...

Send flowers to the Keen family.