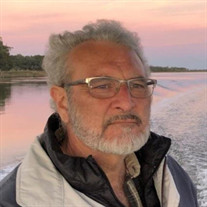 William Shallcross “Bill” Green Jr., age 64, of St. Augustine, FL passed away April 8, 2021 at Baptist Medical Center South. He was born to Bill and Mary (Palmes) Green on March 7, 1957 in St. Augustine, Florida. Bill was a 1975 graduate of St. Augustine High School and attended FSU where he studied art. He later transferred to Bob Jones University in Greensville, S.C. and received a degree in Biblical Studies. Ordained as a minister of the gospel, Bill lived and ministered in Sand Point, Alaska for 10 years. He trained as a bush pilot and used his skills to fly to the many fishing villages of Alaska where he would preach the gospel. In the early 1990s, he returned to St. Augustine. Bill was skilled as an artist in many mediums. He was especially gifted in pencil and pastels but he also created works of art out of metal working as a blacksmith. Bill was very accomplished in whatever he set his mind to. For many years he owned art galleries and worked as an art dealer. He specialized in St. Augustine Historical Art, but also enjoyed collecting Japanese swords and was involved in the promotion of Japanese Sword and Art Shows. He often sourced historical works for art museums throughout Florida. His greatest accomplishment was writing and publishing a book titled “Classic Illustrated Bible Stories” which took him several years to complete. In it he compiled many classical works of art which clearly communicated biblical truths. Bill was a true renaissance man, a purist theologian, a writer and poet, a loving husband, father and grandfather. He will be deeply missed. Bill is survived by his wife, Natalya Green of St. Augustine; son, Caleb Green of Jacksonville, Joseph Green (Courtney) and David Green, both of St. Augustine; a sister, Edith Good (Charles) of Lewisville, Ga; brothers, Frank Green (Sandy) of Ocala, Russell Green (Peggy) of St. Augustine; 4 grandchildren, Matthew, Joey. Mya and Nathan and many extended family members and friends. A funeral service will be held at 12:00 Noon on Wednesday, April 14th, at St. Justin the Martyr Orthodox Church, 12460 Old St Augustine Rd, Jacksonville, FL 3225. A visitation, beginning at 11:00 a.m., will precede the service. Interment will take place in St. Justin Martyr Orthodox Cemetery. St. Johns Family Funeral Home is in charge of arrangements.

The family of William Shallcross "Bill" Green created this Life Tributes page to make it easy to share your memories.

Send flowers to the Green family.