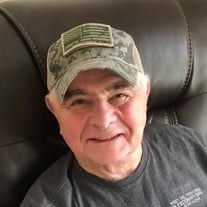 Wilfred Joseph Provost (“Buddy”), 76, of St. Augustine, passed away on June 4, 2022, with his wife and family by his side. He was born in Tallahassee to the late Maurice and Olivine Provost and grew up in Vero Beach. He attended Vero Beach High School where he formed and maintained life-long friendships. Following high school, he joined and served his country for 27 years in both the United States Air Force and Florida National Guard. His time in the service led to deployments in England, Italy, Germany and Saudi Arabia. Further, his travels in the service brought him great pride and provided him an opportunity to design and build infrastructure for schools in underprivileged areas throughout Central and South America. Following his retirement from the U.S. Air Force, Buddy continued his career as a civil engineer for the State of Florida Department of Transportation. He would later retire from the DOT and close out his career at EC Driver where he retired in 2006. His time spent as the starting catcher for 5+ years on the EC Driver softball team and participating in weekend fishing tournaments brought him considerable joy and lasting friends. Buddy moved to Tallahassee in 1977 with his wife, Frances, and then three children (Tammy, Rick, Paul); the two would complete their family with the birth of Scott and Chad. Buddy spent 40 years in Tallahassee raising his family, which included endless baseball games, soccer matches, graduations and active volunteering with the Boy Scouts of America. He utilized his personal experiences in the military and Eagle Scout knowledge to teach his sons and others in Troop 109 the fundamentals of camping, fishing, and hiking through areas including the Appalachians and Atikaki Provencial Park Canada. In 2007 he moved to the Sea Pines Community of St. Augustine with Frances. He spent his final 15 years forming a new set of friendships, fishing in the intercoastal, taking drives through the national forest, and being better known as “Pops” by his grandkids. He was loved by all. He is survived by his wife of 48 years, Frances Provost; children, Tammy Kozacko (Mark), Rick Kelly (Dana), Paul Wilfred Provost (Libby), Scott Provost and Chad Provost (Kate); sisters, Susan Lee, Mary Whitaker(Dave), Martha Provost; 13 grandchildren; very close cousins, Clifford and Susan Cloutier and TJ Provost; and many nieces and nephews. A memorial service will be held at 3:00pm on Saturday, June 11, 2022 at St. Johns Family Funeral Home with Father Ken Herzog officiating. Buddy will be laid to rest at Tallahassee National Cemetery at a later date. In lieu flowers the family request you make donations by clicking here to Trinity Parish Church, or by choosing the charity of your choice. St. Johns Family Funeral Home is in charge of arrangements.

Wilfred Joseph Provost (&#8220;Buddy&#8221;), 76, of St. Augustine, passed away on June 4, 2022, with his wife and family by his side. He was born in Tallahassee to the late Maurice and Olivine Provost and grew up in Vero Beach. He attended... View Obituary & Service Information

The family of Wilfred Joseph "Buddy" Provost created this Life Tributes page to make it easy to share your memories.

Send flowers to the Provost family.