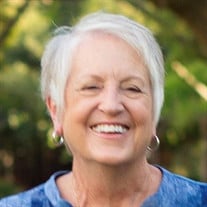 Virginia Lou “Ginny” Groeteke, born Virginia Lou Ashbrook, age 74, of Jacksonville, FL passed away on Friday, February 5, 2021 and is now in the presence of her Lord. Ginny was born July 21, 1946, in San Angelo, TX to Joseph Louis and Elizabeth (Betty) Jane Ashbrook. She was a dedicated member of Mandarin Presbyterian Church where the church family was a big focus. Ginny’s father was an Air Force pilot giving her the opportunity to travel and experience living in many places, including Texas, Ohio, New York, Canada, Florida, Taiwan, and Hawaii. She attended High School in Taiwan and graduated in Hawaii. She attended college in Hawaii for one year before her parents retired in Panama City, FL. There she completed her studies at Gulf Coast Community College. She met Bob, her husband while working at Robert’s Photography Studio and married six months later in Panama City, FL. They were married 54 years. She enjoyed cooking, doing for others, gift giving, spending time with friends, shopping, traveling and worshiping God. Ginny spent her summers traveling with her mother or Bob to visit her sister and family in New Mexico or her son and family in California. She was an exceptional wife, mother and grandmother who was happiest when her whole family was together. Ginny was deeply committed to her grandchildren and her relationship with them was truly special. She also enjoyed teaching children of all ages in Sunday school and vacation bible school, spreading the Lord’s word to all she met. She was preceded in death by her parents and son Robert Paul Groeteke II. She is survived by her husband Bob, two sons, Michael (Nicole), Matthew (Jackie) Groeteke, and three grandchildren, Drake, Gage, and Raiden whom she loved immensely. Also, a brother Joseph (Connie) and sister Kim (Robert), nephews Justin, Kyle, Kevin, and niece, Brianne. Funeral services will be held at 1:00 p.m. on Thursday, February 11, 2021 at the Loretta Road campus of Mandarin Presbyterian Church in Jacksonville, FL. A visitation beginning at 12:00 noon will precede service. Graveside services and interment will follow at 10:00 a.m. on Friday, February 12th at Evergreen Memorial Garden in Panama City, FL. St. Johns Family Funeral Home is in charge of arrangements.

The family of Virginia Lou "Ginny" Groeteke created this Life Tributes page to make it easy to share your memories.

Send flowers to the Groeteke family.