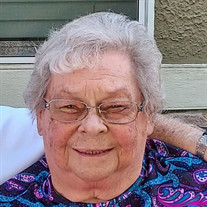 Veda M. Mott, 87 passed away November 28, 2021, in St Augustine, Florida. She was born in St Petersburg, Florida to Leo Sylvester Mardis and Carrie Fletcher Mardis. She attended and graduated from St Petersburg High School where she was the first chair cornet player in the high school band. Following her high school graduation, she worked at several local stores. In 1954 she married Earl Mott and joined Earl who was stationed in France with the US Air Force. While in France they had two sons Ronald Mott and Richard Mott. Returning to the States, they were stationed in Savannah, Georgia, Springfield, Massachusetts, Grand Forks, ND, and Omaha, NE. They retired while in Omaha and later moved to St Augustine, Florida. During the early years, Veda enjoyed camping together with family and friends, fishing and being outdoors. Many of those early camping trips were spent using a tent and roughing it. In the years that followed they enjoyed camping in a HI-LO travel trailer and in retirement upgraded to a nice new Holiday Rambler trailer. Veda also enjoyed watching football, especially the Nebraska Cornhuskers when they were winning. She would yell at the TV if it was not the play that she wanted. Veda was a member of the Salvation Army her entire life and held positions such as Sunday School Teacher, Junior Soldier Leader, Corps Cadet Leader, Welcome Sergeant and Home League Secretary to name a few. She played cornet in all the places she lived and then switched to alto horn in the Omaha Citadel Band. She also sang in the Songsters (choir). Once the kids were old enough to fend for themselves, she helped open a Lee Wards craft store. She worked there for 20 years until it closed. Veda is survived by Earl Mott, her husband of 67 years, son Ronald and his wife Rebecca, and son Richard; grandchildren Steven, Daniel, Wyatt and Colton and great grandchildren; Evelyn, Henry, Josh, Alice, and Nathan; brother, Edward Mardis A Visitation is scheduled for Saturday, December 4, 2021, at 10:00 AM followed by a Celebration of Life at 11:00 AM. These will be held at St Johns Family Funeral Home 385 State Road 207 St Augustine, Florida 32084. Those unable to attend the services at the funeral home can view the service live streamed at https://iframe.dacast.com/b/156599/c/549019. Interment and Graveside Services will follow at the Evergreen Cemetery located at 505 N Rodriguez Street St Augustine, Florida 32084. St Johns Family Funeral Home is in charge of services.

Veda M. Mott, 87 passed away November 28, 2021, in St Augustine, Florida. She was born in St Petersburg, Florida to Leo Sylvester Mardis and Carrie Fletcher Mardis. She attended and graduated from St Petersburg High School where she was the... View Obituary & Service Information

The family of Veda Mae Mott created this Life Tributes page to make it easy to share your memories.

Send flowers to the Mott family.