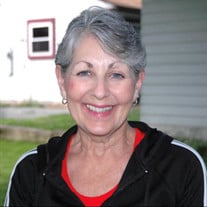 On Wednesday, April 13, 2022, Vanessa Alexandria Boyd, loving wife and mother of two passed away at age 74 due to cancer. Vanessa was born on September 20, 1947 in Alliance, Ohio, to William and Mildred Woolf. She studied as a classical pianist at the St. Louis Conservatory of Music, where she received a full scholarship, then later completed a Bachelor’s Degree in Physical Therapy at the University of North Florida in 1996, working over 20 years, most of them at the Orange Park Medical Center, from which she retired in 2015. Vanessa married Robert (Bob) Boyd on March 12, 1983 in Key Biscayne. They moved in June of 1983 to Orange Park, where they raised their son and daughter. Vanessa is survived by daughter Mechele Prescott (son-in-law, Darrell Prescott), and son Micheal Boyd (daughter-in-law, Lisa Boyd), and her five grandchildren: Austin Boyd, Taylor Boyd, Zack Prescott, Ryan Prescott, and Tyler Prescott. She is also survived by her sister, Janet gillis, and brother, Don Woolf. Her parents and older brother, David Woolf, preceded her in death. Vanessa’s love of music and skill as a pianist resulted in many beautiful original compositions, played to the delight of many audiences. One could see and feel the music come to life as she played so expressively and evocatively. Vanessa loved the Florida Striders Children’s Run/Walk Program, coordinating the program for many years. Vanessa also fell in love with Acadia National Park and built a home there in 2008 so that she could divide her year between her Bar Harbor and Orange Park homes. She loved travel, visiting many National Parks before taking several Expedition cruises in recent years to Antarctica, the Arctic, Alaska, and the Galapagos, in addition to a 10 week Miami to Bali adventure. Her favorite location, however, was hiking the Carriage trails of Acadia National Park near her home. She leaves a legacy of kindness, love, service, and beautiful original music. Vanessa decided to donate her body to science. We would request that, in lieu of flowers, that you honor Vanessa with a donation to either your favorite cause, or one of hers. Checks for the Florida Striders Children’s Run/Walk Program can be sent to Florida Striders, and mailed to Bill Krause, 3041 Bridlewood Lane, Jacksonville, FL 32257. The Florida Striders are a 501c3 organization. Friends of Acadia, PO Box 45, Bar Harbor, ME 04609 or Support & Donate to Friends of Acadia in Bar Harbor Maine. The Alzheimer’s Foundation, Alzheimer's Association | Donate to Fight Alzheimer's Disease, or the Foundation Fighting Blindness, FFB Donation Website. And, of course, the American Cancer Society, Help save a life. I just did. Wherever your heart leads you will be perfect. Memorial plans are not determined at this time but we will keep all informed in the months ahead.

On Wednesday, April 13, 2022, Vanessa Alexandria Boyd, loving wife and mother of two passed away at age 74 due to cancer. Vanessa was born on September 20, 1947 in Alliance, Ohio, to William and Mildred Woolf. She studied as a classical pianist... View Obituary & Service Information

The family of Vanessa Alexandria Boyd created this Life Tributes page to make it easy to share your memories.