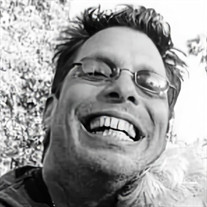 Todd Pendleton Smit, age 54, passed away on June 16, 2022 at Bailey Family Center for Caring in St. Augustine, FL. Todd was born on June 28, 1967 in Summit, NJ to parents Louis H. and Dorothy J. (Pendleton) Smit. Todd grew up in Union, New Jersey. At the age 14 he moved with his family to St. Augustine Florida, where he lived throughout his teens. In 1985 he graduated from Flagler Palm Coast High School and later attended community college. Todd was a talented musician and played in bands in L.A., California. He learned the technical, engineering side of music on the job while he worked sound for other bands and comedy clubs. He also worked as a limo driver where he met many stars including Carrol O'Conner and William Shatner. In 2006 he moved back to Palm Coast to take care of his parents. He loved spending time with his friends, body surfing, fishing, and writing and playing music. His friends called him Otis. He was a larger than life, empathetic and caring, artistically and musically creative, hilariously funny, loving, crazily exhausting, and always "dialing it in" when you needed him...until now. Life will never the the same. - Ian He was preceded in death by his parents, Louis & Dorothy Smit. He is survived by his brother, Ian, and his wife, Katherine McGlynn of Highland Lakes, NJ, and a cousin, John McCarter. Private services will be held. Online condolences can be made at https://www.stjohnsfamilyfuneralhome.com/. St. Johns Family Funeral Home are in charge of arrangements.

The family of Todd Pendleton Smit created this Life Tributes page to make it easy to share your memories.

Send flowers to the Smit family.