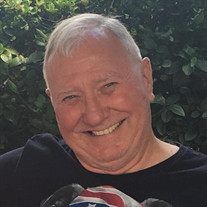 Thomas Lee “Tom” Stewart, age 74, of East Palatka passed away on October 12, 2021, at his home, after a brief illness. Born in St. Augustine to Elmer and Betty Jean Stewart, Tom grew up in Orlando, Florida, where he graduated from Boone High School. He joined the U.S. Navy right out of high school and proudly served his country during the Vietnam War. After his discharge from the navy, Tom started driving a delivery truck for the Anheuser-Busch Beer Company and later for Coca Cola. In the early 1980’s, he went to work as an apprentice for a plumbing company and became a very skilled and successful plumber. He went on to open his own company and was one of the first plumbers in the Orlando area to offer camera inspection of plumbing drains and lines. Tom met the love of his life, Dorene Pomeroy, in Orlando and they were married on October 25, 2003. After retiring plumbing in 2009, he relocated to Hawthorne, FL. Tom was most recently employed with St. Johns Family Funeral Home in St. Augustine, where he was a beloved member of the staff and “Chief Storyteller”. Tom was faithful, enthusiastic, and reliable. He enjoyed sharing entertaining stories of his life-experiences, politics and sports as well as his opinions and knowledge on all kinds of topics. He was a true gentleman, had a clean sense of humor, and kept everyone smiling. A devoted Christian, he had a caring spirit for everyone he came in contact with and will always be remembered for his fatherly advice at the end of the day: “You be safe!” Tom loved everyone around him. Above all, Tom cherished his wife, children, and grandchildren, and he will be deeply missed by family and friends alike. He is survived by his wife of 18 years, Dorene Stewart of East Palatka; daughters, Stefanie Homitz, and her husband, Craig, of Apopka, FL, Tina Hendricks, and her husband, Rob, of Groveland, FL and Heather Stewart of Clermont, FL; a stepson whom Tom loved as his own son, Tim Harrop of Cocoa, FL, a sister, Susan Borchert of Tennessee; and grandchildren, Shelby, Vinny, Maggie, Stanly, Carson, Aubrey, Kylie and Emma. Tom is also survived by many extended family members including: stepson, Kyle Harrop his wife Megan; son in law, Vince Licavoli; sister in law, Donna O’Steen; niece, Summer Deogracia and her husband Andy and their son Sebastian; and a nephew, Jonathan Garrett, his wife Becky, and their daughter Madison. In addition to his parents, Tom was preceded in death by a brother, Jerry. A celebration of Tom’s life will be held from 12 noon to 3pm on Saturday, November 6, 2021 at Tom & Dorene’s home, 200 Putnam Avenue, East Palatka, FL. 32131. St. Johns Family Funeral Home and Crematory is in charge of the arrangements.

Thomas Lee &#8220;Tom&#8221; Stewart, age 74, of East Palatka passed away on October 12, 2021, at his home, after a brief illness. Born in St. Augustine to Elmer and Betty Jean Stewart, Tom grew up in Orlando, Florida, where he graduated from... View Obituary & Service Information

The family of Thomas Lee "Tom" Stewart created this Life Tributes page to make it easy to share your memories.

Send flowers to the Stewart family.