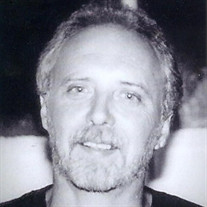 Terry Lee Robinette, age 70, of Pomona Park, FL, took his last breath on Earth and his first breath in Heaven; no longer locked away from his memories of those he loved, on Oct. 20, 2021 at 4:20 pm at Roberts Care Center, Haven Hospice, Palatka, FL. Terry’s birthplace was in Hardy, KY on Oct. 28,1950 to the late Lonnie Gee Robinette and Ethna (Bowen) Robinette who survives. Terry was raised in Crestline, OH where he had many lifelong friends, that he shared many great memorable times with. Terry was instantly likable. He enjoyed being a storyteller. He was a person who you could share a good laugh with. His daughter, Terah, says the movie, “The Big Fish” reminds her of her father! In 1969, Terry graduated from Pioneer Joint Vocational School in Shelby, OH for “Auto Body & Paint Restorations”. Terry began buying and restoring vehicles at the age of 16. Taking a vehicle and restoring it was his passion in life. Terry was a perfectionist in his trade, and he taught his son Tyson those same traits. He had his own business, “Terry’s Techniques” for 17 years. Many people would compliment his finished restorations. His friends would always ask Terry to help them find the most reliable vehicles to purchase. They would trust his expert advice. Terry probably could have put a vehicle together with his eyes closed! He loved going to custom car shows and could tell you every year, make and model of a vehicle. Terry met the love of his life of 42 years, Deb Stewart, also from Crestline, OH in 1978. They were married Feb.24,1979. He charmed her with his profound intelligence, his gorgeous blue-gray eyes, and a smile that won her heart. As a child, Terry enjoyed many summers camping and fishing at Lake Erie with his family. Terry also loved living with Lake Broward in his backyard, where he would enjoy taking anyone for a memorable boat ride or taking kids for a fast ride behind the boat on a tube or kneeboard. He loved raising Pitt Bulls and raised 13 dogs during his life. The last dog by his side was named Colton. Terry loved making his beautiful Grandchildren laugh by teaching them, “The Witch Doctor”, “The Purple People Eater”, and the “Coconut” songs! Terry loved music; especially the Delta Blues, Bluegrass, Country and 1960-1970’s music. He loved playing his stereo and would blare his music in the mornings to wake up his children, Tyson and Terah when they were young! His favorite musician was John Prine. Terry enjoyed watching comedy and western movies. His favorite movie was “Jeremiah Johnson”. Terry’s favorite place to live was Estes Park, CO. He always talked about raising a bear cub in the Rocky Mts. He always wanted to return back to this majestic state, and he got his wish for 2 years. To mourn his loss and cherish his memories, he leaves behind his wife Deb, his talented son, Tyson Robinette and his artistic daughter, Terah Robinette. He was especially proud of his 5 Grandchildren; Zien, Lynnix, Lyric, Escher & Irie, and enjoyed watching them grow. He is also survived by his sister, Linda Griefenstine and Brother-In-Law, Ralph Griefenstine of Crestline. Terry was an Uncle to Kelly & Zach Phillimore and Ralph Griefenstine. He is also survived by his Mother-In-Law, Sandra Spencer of Mansfield, OH., and a host of other family members and a special friend, Tony Armstrong, (“A brother from a different Mother”.) Per Terry’s wishes, no service will be held. Our family appreciates your prayers and respect for our privacy at this time. Much heartfelt thanks to Haven Hospice Roberts Care Center of Palatka, FL. for the compassionate and expert care they gave Terry as he transitioned to the other side. Your staff and facility are amazing and our family will forever be grateful to you. Terry is now smiling from Heaven, and yes, he now remembers his loved ones; as when one enters Heaven, they are well and healed again.💜 St. Johns Family Funeral Home is in charge of arrangements.

Terry Lee Robinette, age 70, of Pomona Park, FL, took his last breath on Earth and his first breath in Heaven; no longer locked away from his memories of those he loved, on Oct. 20, 2021 at 4:20 pm at Roberts Care Center, Haven Hospice, Palatka,... View Obituary & Service Information

The family of Terry Lee Robinette created this Life Tributes page to make it easy to share your memories.

Send flowers to the Robinette family.