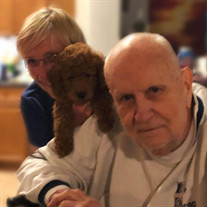 Steve J Miko, age 79, of St. Augustine FL passed away peacefully at home on June 12, 2022. Steve was born December 26, 1942 in Cleveland OH to parents Steve J and Margaret Mary (Vana) Miko. His father was declared Missing in Action over the Marshall Islands on January 2, 1944 during WWII. Steve grew up in Cleveland attending St. Henry’s grade school, Benedictine High School and graduated from John Adams High School with honors. He received a Bachelor of Science degree in chemistry from Case Western Reserve University. He continued his studies at Cleveland State University, originally Fenn College, where he earned his master’s degree in Chemical Engineering. Steve received the American Institute of Chemical Engineer’s Scholarship award for maintaining the highest scholastic standing of any member in his chapter. Steve was also an active member of Delta Sigma Phi fraternity. Steve met his wife to be Marcia Ankenbrandt at Cedar Point Amusement Park in Sandusky Ohio. The couple married on May 22, 1965 in Maumee Ohio, spent 10 years residing in Lyndhurst Ohio and eventually built a new home in Hudson Ohio where they raised their family. His love of woodworking inspired him to design and build custom moldings and cabinetry in that home. Steve and Marcia spent many enjoyable weekends and vacations in Sandusky living aboard their sailboat and exploring the Great Lakes, the Northern Channel and Georgian Bay. Steve spent his entire career working for BP Chemicals, formerly known as The Standard Oil Company of Ohio (Sohio), as a Chemical Engineer, Project Manager and Senior Consultant. He was published in trade journals and held patents. He traveled internationally for BP and experienced many countries and cultures. An accomplished chef, he would often return home to replicate meals experienced in foreign countries with a specialty in Asian food. His favorite past-times included sailing, woodworking, and tennis. He enjoyed landscape design and created an amazing pond and waterfall in his yard. He was instrumental in turning an old cow pasture into a tree filled oasis in their Hudson neighborhood. Steve’s intelligence led him to be a teacher of everything he knew; he loved sharing knowledge. He enjoyed meeting up with the St. Augustine Browns Backers to watch the Cleveland Browns play football. Steve was a very kind man and will be deeply missed. He was preceded in death by his parents, Margaret Mary and Steve Miko. He is survived by his wife of 57 years, Marcia Miko of St. Augustine, FL; daughter, Lisa Bolotin and husband Todd of Hudson OH; Steve Miko and wife Shannon of Willoughby, OH; Patrick Miko and wife Carolyn of St. Augustine, FL; and seven grandchildren Dylan & Ava Martz, Melissa Miko, Chloe, Kendall, Chance & Quinn Miko. A celebration of Steve's life will be held in Hudson, Ohio at a later date. Online condolences can be made at https://www.stjohnsfamilyfuneralhome.com/. St. Johns Family Funeral Home will oversee arrangements. The family asks that in lieu of flowers, donations can be made to the Michael J Fox Foundation for Parkinson’s Research.

The family of Steve J. Miko created this Life Tributes page to make it easy to share your memories.

Send flowers to the Miko family.