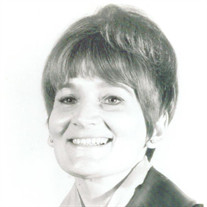 Stella was born to William J. Merry and Madeline Volante Merry on June 11th, 1934, in London, England. After marrying James Weedman U.S.A.F. (deceased), she and her daughter Nancy left Clacton-on-Sea, England to join her husband in America. While raising nine children, Stella met and married the love of her life, William (Bill) Muller in Evansville, IN. They were united in marriage in December of 1971 after which Bill adopted all nine of her children. Their children deeply loved Bill who passed away in 2018 after 47 years of marriage. Stella’s life work was taking care of the elderly. For thirty years she dedicated her work to all areas of geriatric care, first as a Nurse’s Aide and then as a Social Director at several facilities in Indiana and Ohio. Mayor Goldsmith of Indianapolis, IN, recognized Stella for her dedication and hard work by declaring June 9th, 1996, as Stella Muller day in the city of Indianapolis. Coming from a family of entertainers, Stella loved being involved in community theatre in whichever city she called home. She was a very talented actress, writer and director and won several awards for her productions. Stella moved to Anastasia Island, St. Augustine with her husband Bill in 1997. Stella grew up by the sea and it was her wish to retire by the sea as well. Stella and Bill became members of and were very involved in the Parish of St. Anastasia Catholic Church. Stella joined the St. Anastasia Ladies Association serving as President for 4 years. Stella was also on the Parish Council Board. Bill and Stella very successfully ran the yearly garage sale for many years. They were also tireless volunteers at Catholic Charities for 10 years as well as serving on the Board of Directors. Stella loved to travel and got to see most of the world whether traveling as part of her work or with Bill and her children. She was an avid reader, master of crossword puzzles, and a big fan of old movies. She also loved having her family around her. In addition to her loving husband, Stella was preceded in death by their beloved grandson, William (Billy) Muller, at age 19 in 2000, their beautiful, great-great grandson Jordan Thomas, at age 19 months in 2017 and their youngest and much loved child, Vincent Muller September 21st, 2021, at age 55. Stella is survived by her eight remaining children, Nancy Cilento, Barbara Muller, Teresa (Edward) Guard, James (Annemarie) Muller, Aurelia Muller, Kimberly Muller, Emily (Ronald) Firari and Anthony (Barbie) Muller. She is also survived by 23 grandchildren, 36 great-grandchildren and four great-great grandchildren. And George, her furry four-legged child. She is also survived by sisters Barbara Aldis and Marie Amin and many nieces and nephews. A funeral mass will be held at St. Anastasia Catholic Church on Thursday, October 7th, at 11:00 a.m. with a reception to follow. In lieu of flowers, donations may be made to the Cystic Fibrosis Foundation, The Multiple Sclerosis Association, The Wounded Warriors Project, or S.A.F.E. Pet Rescue. Funeral arrangements are being handled by St. Johns Family Funeral Home & Crematory

Stella was born to William J. Merry and Madeline Volante Merry on June 11th, 1934, in London, England. After marrying James Weedman U.S.A.F. (deceased), she and her daughter Nancy left Clacton-on-Sea, England to join her husband in America. While... View Obituary & Service Information

The family of Stella Madeline Muller created this Life Tributes page to make it easy to share your memories.

Send flowers to the Muller family.