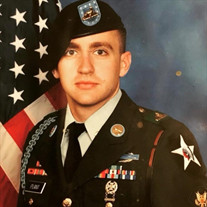 SSG Seth Michael Plant, age 30, the cherished son of Michael and Joy Plant tragically lost his life on Tuesday, May 10, 2022 while stationed in Anchorage, Alaska at JBER. Seth was born on November 16, 1991 in Jacksonville, Florida and was raised in Starke, Florida before moving St. Augustine where he lived the remainder of his life. Seth graduated from Pedro Menendez High School in 2010 and enlisted in the United States Army immediately after. Serving his country was a life-long dream for Seth, and the zeal he pursued his dream with was unmatched. During his time in the Army he served in Afghanistan as part of Operation Enduring Freedom with the United States Navy SEALS. He was a decorated soldier and received the Army Commendation Medal; Army Achievement Medal; Army Good Conduct Medal; National Defense Service Medal; Afghanistan Campaign Medal; Global War on Terrorism Service Medal; Non-Commissioned Officer Professional Development Ribbon; Army Service Ribbon; Overseas Service Ribbon; NATO Service Ribbon; Combat Infantryman’s Badge; and the Parachutist Badge, and most recently the Arctic Tab. At the time of his passing, Seth had recently been promoted to the rank of Staff Sergeant in Company C, 3rd Battalion, 509th Infantry Arctic Airborne unit. He was a decorated war veteran, a leader, a fighter, and a hero. Seth was also a hard worker in the service industry for many years while serving the locals and tourists of St. Augustine. During this time he made a multitude of friends, and everyone knew Seth. He never met a stranger. Seth was a true Mommas boy. His fathers pride and joy. Seth and his siblings always joked that he was the “favorite child.” The bond between Seth and his sisters is rare and special. He adored being called “Uncle Bubby” by his nieces and nephew. Seth was also a loyal and beloved grandson, nephew, and cousin. He loved being outdoors, playing the drums, shooting guns, motorcycles, and spending time with his family and friends. Even though Seth was a tough military man, he loved to sing, dance, laugh, rough house with his nieces and nephew, visit the beach, hike mountains and be with his family and friends. He never missed an opportunity to be home with the people he loved so dearly. He loved to cook. He loved to eat. He loved the holidays, especially Thanksgiving. But his favorite Holiday of all was the 4th of July. He loved to adorn his most patriotic attire, visit the lake with his family and then downtown St. Augustine for the fireworks. He would’t miss it. Seth had a host of nicknames including Bubby, Budders, Rooney, Self, Man Cub, Sethy Poo, Sergeant Self, Seffers, Shaggy, Big Smoke and of course “The Favorite Child”. Survived by his Father (Mike), Mother (Joy), Sisters Gini Solano and Amber Hersey, nieces Sophia and Gabriella Hersey and Nephew Jaxon Hersey. Paternal Grandmother Carol Plant, Uncle Paul Plant, Aunt Vickie Daniel, Uncle Jeff Plant (Anna), Maternal Grandmother Sharon Carlton, Uncle Barry Carlton, Uncle Daniel Carlton (Michelle), Uncle Matthew Carlton (Hollie), his beloved Black Sheep, and a host of aunts, uncles, cousins and friends. Preceded in death by his older brother Cade Plant, Paternal Grandfather Kenneth Plant and Maternal Grandfather Martin Carlton, Niece Mila Hersey and Nephew Holden Hersey, Uncle John Plant, Cousin Clint Moore Jr, and his many fallen brothers in arms. Visitation will be Friday May 27th from 5-8 at Colonial Church, 550 SR 207, St. Augustine. Funeral Service is 11am on 5/28 at Anastasia Baptist Church. Interment with Full Military Honors will follow at San Lorenzo Cemetery. Flowers are gratefully declined and those wishing may make a contribution in his memory to the Junior Service League of St. Augustine, PO Box 244, St. Augustine, FL 32085 While comforting a fellow fallen soldiers family member Seth said “Unfortunately that’s how life works, it takes the most shining lights away from us. You just have to remember him and everything about him and don’t let him be forgotten” The family invites you to honor his life, his service and his memory. Today and all days. Never forget him. St. Johns Family Funeral Home is in charge of the arrangements.

SSG Seth Michael Plant, age 30, the cherished son of Michael and Joy Plant tragically lost his life on Tuesday, May 10, 2022 while stationed in Anchorage, Alaska at JBER. Seth was born on November 16, 1991 in Jacksonville, Florida and was raised... View Obituary & Service Information

The family of SSG Seth Michael Plant created this Life Tributes page to make it easy to share your memories.