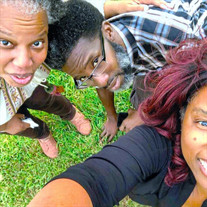 Sean Gregory Lyons, age 52, of St. Augustine, passed away on June 11, 2021 at the Bailey Family Center for Caring with his family by his side. Sean was born on July 31, 1968 in St. Augustine, Florida to his parents, John Willie Lyons, Jr and Thelma Wright. He was known to his family as “Man” and to his friends “Jap”, and lived most of his life in St. Augustine. He grew up attending First Baptist Church and graduated from St. Augustine High School with the Class of 1986. While at St. Augustine High School, Sean was active in the Drama Department. Sean had a big personality and was always the life of the party. He did a spot on impersonations of Michael Jackson and Tupac. After graduating from high school he joined the US Army, completing his basic training at Ft. Benning, Georgia, and was stationed in Hawaii. Most recently he worked in facility maintenance at Webster Elementary School. He met his wife to be, Demetria Connor, in 1996. Sean first noticed Demetria in a hair salon and ran into her again at a grocery store. They were together from then on and married in 2002. Sean helped raise a family of eight children. He was a loving man, a devoted husband and a great father, and he will be deeply missed. He was preceded in death by his mother, Thelma, and his stepmother, Rose Lyons. He is survived by his loving wife and best friend, Demetria Lyons; his children: Yashika Whitfield (Lucy), Sean Lyons II, Kyra Connor, Ke’Sean Lyons, Joshua Lyons, Kevon Connor (Angelica), Janice Williams, and Christian Lyons (Antasia). Also left to honor him, his father, John Lyons, Jr; stepfather, Herman Wilder; sisters: June Floyd (William) and Assistant Pastor Karla Tandy. Brother: John Lyons, III (Teneka); two stepsisters: Kimberly White and Lalena White; and stepbrother: Adrian White (Andrea). Sean had 15 grandchildren, and 1 great nephew and great niece. Loving in-laws, Septimus, Jr and Wyverne Connor; brother-in-law, Septimus Connor III, and Artimus Connor (deceased). As well as his loving maternal aunts – Bettye, Donna, Betty Jean, Marciana; paternal aunts - Pauline (Johnny), Rosalee, Ruth (John), Essie (Horace), Joyce, Marichia (Darryl), and a great aunt, Ruth Miller; paternal uncles, William, Ronnie (Angela), Michael, and Joey (Anita); and a host of other loving relatives and friends. Sean had other extended family left to cherish his memory: John (Yvonne), Wanda (Carson), Lilquenda (Henry), Jevon (Kelwin), John, James, and Alexis. A celebration of Sean’s life will be held at 10 am on Saturday, June 19, 2021 at First Baptist Church in St. Augustine with Pastor Michael McConnell officiating. St. Johns Family Funeral Home is in charge of arrangements.

Sean Gregory Lyons, age 52, of St. Augustine, passed away on June 11, 2021 at the Bailey Family Center for Caring with his family by his side. Sean was born on July 31, 1968 in St. Augustine, Florida to his parents, John Willie Lyons, Jr and... View Obituary & Service Information

The family of Sean Gregory Lyons created this Life Tributes page to make it easy to share your memories.

Send flowers to the Lyons family.