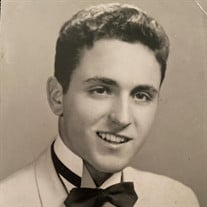 On November 12, 2021, not content to continue without his beloved wife Patricia who departed this earth on August 4th, SAMUEL P. DIMUZIO of Saint Augustine, Florida, decided to join her. Sam had lived 87 good, productive and happy years. He was born Savario Filippo DiMuzio on August 11, 1934 and raised in the Germantown section of Philadelphia, Pennsylvania. His parents, Italian immigrants Rosa Rinaldi and Domenico Sabatino DiMuzio, met in Palmerston, Pennsylvania in 1919 and married there. Sam graduated Immaculate Conception Grammar School in 1947, and then North Catholic High School in 1951 and La Salle College (now La Salle University) in 1955. After college, Sam was offered a position at IBM, where he worked for many years until his retirement. At a CYO dance in Philadelphia, Sam met the love of his life, Patricia Ann Burgoyne, and they married on January 3, 1959 at St. Athanasius Church in the West Oak Lane section of Philadelphia. Their 62-year marriage produced five children, three of whom were born in Philadelphia, Pennsylvania and the last two in Ridgefield, Connecticut where the family had relocated in 1964. After retirement, Sam and Pat moved to Saint Augustine, Florida. Fifty-six years ago, at Sam and Pat’s kitchen table, a group of determined and stalwart theatre lovers banded together to found the Ridgefield Workshop for the Performing Arts, which has taken its place as one of Connecticut’s premier theatre companies, still creating art today. While continuing his work at IBM, Sam was also an elected member of Ridgefield’s school board. Sam absolutely loved to read and was an avid fisherman. For many years, while the family lived up north, the DiMuzio summers included happy days at the beach in the Outer Banks, North Carolina and Avalon, New Jersey, where Sam and Pat welcomed family and friends to join them. Their generosity was limitless, and there was always room for one or a dozen more at their dinner table or in their home. They took in many strays, animals and people, and loved nearly every minute of it. Predeceased by his parents and his siblings Adante “Don” DiMuzio and Lucy DiMuzio, he is survived by his sisters Mary Arcari and Aliera “Ollie” Salera, his children Rose DiMuzio, Louis John DiMuzio, Jeanne Marie DiMuzio Walti (Jean-Marc), Patricia Ann ”Trish” DiMuzio, Ann Alvera “Vera” DiMuzio Campanella (Sean-Paul), his favorite and only grandchild, Jackson Maximilian Walti, and by many cherished relatives, in-laws and dear friends. Sam loved his family deeply and unconditionally and lived his life fully. “Attention must be paid to such a man.” Graveside Service at 2:00 PM, Monday, November 22, 2021, San Lorenzo Cemetery, 1635 US 1 South, Saint Augustine, FL 32084. Contributions in Sam’s memory may be made to the staff at Community Hospice and Palliative Care in Jacksonville, Florida (www.communityhospice\give). Their loving service to both Sam and Patty was selfless and angelic.

On November 12, 2021, not content to continue without his beloved wife Patricia who departed this earth on August 4th, SAMUEL P. DIMUZIO of Saint Augustine, Florida, decided to join her. Sam had lived 87 good, productive and happy years. He... View Obituary & Service Information

The family of Samuel Philip DiMuzio created this Life Tributes page to make it easy to share your memories.

Send flowers to the DiMuzio family.