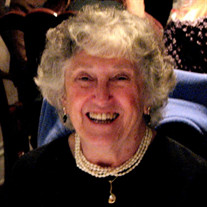 Ruth Katharine Slobody, passed away at the age of 101, surrounded by family on May 21, 2022 in St. Augustine, FL. Ruth was predeceased by her husband, Nat Slobody in 1962, leaving her a widow with seven children to raise. Her grace and dignity in the face of adversity were qualities that inspired admiration, respect and honor in everyone who knew her. She entered the workforce and took over management of her husband’s large plumbing contracting firm in Cleveland, Ohio. This was at a time when few women were contractors. She was a trailblazer for the women who followed. Her Irish beauty belied a stolid work ethic that propelled her through the years ensuing moves to Clearwater and Gainesville, Florida. In Gainesville, Ruth was well known as the manager of the Thornebrook Village Shopping Center, her favorite lifelong job where she was able to indulge her creativity and use her many management skills to turn the center into a thriving community hub. Thornebrook was known for its’ annual Art Show, Corvette shows, Easter egg hunts, and decorative Christmas spirit. The Center thrived under her stewardship until she retired at the age of 85. (She looked 65!) Ruth was born, Ruth Katharine Haley, the fifth of six children born to Edgar and Esther Haley in Plattsburgh, NY on June 23, 1920. Tragically her father was killed in a hunting accident when Ruth was one year old and her mother was pregnant with the only son, Edgar. There were four lean years to follow and the children eventually went to an orphanage in Ogdensburg, NY for five years until their mother and new husband (our beloved “Gramps”) could retrieve them. After graduating high school, the siren song of New York City called to her and she moved in with her glamorous, Aunt Corinne on the West Side of NYC. She worked as a waitress on Roller Skates and sang with a band. Soon it was Chicago that wooed her and she worked for Stouffer’s Restaurant where she met the true love of her life, Nat Slobody who worked as a plumbing engineer for Stouffers, helping to design their refrigeration systems. Nat and Ruth married and started their family together, moving to Cleveland, Ohio. In Cleveland they worked to start their own business out of their garage. It grew into one of the largest plumbing contracting companies in Greater Cleveland. They welcomed their expanding brood of seven children into their lives and moved to Cleveland Heights and then to Shaker Heights, Ohio. Those years were filled with volunteer work; PTA presidency, Girl Scouts, Boy Scouts, advocating for the local orphanage, combined with opera lessons to hone her beautiful voice, yachting on Lake Erie, and the countless extracurricular activities of seven children. Ruth was not only a rescuer of cats, she was a rescuer of many souls who found solace and comfort in her wise counsel and compassion. She and her husband purchased a home for Ruth’s parents, who had struggled for most of their years. They were some of the many recipients of their generosity over time. As circumstance changed, Ruth was ever resilient. Always known for her smile and pleasant disposition, she was never defined by tragedy but always strived to meet her challenges head on with no self pity or ingratitude. Ruth leaves behind a grieving and loving family who applaud her many accomplishments, Dr. Robert Slobody (Sharon), Carol Slovis (Dr. Norman), Betsy Whitaker (Douglas), William Slobody (Mira), Beverly Cavazzi (Arthur), Joanne Wharton (Robert); along with eighteen grandchildren and thirty-four great grandchildren. Nora Lee Albree the eldest child of Nat and Ruth, passed away in 1980 at the age of 39. We were dazzled to know her and share her with the world. Heaven surely ahs received an angel. A service will be held at 6:00 pm on Thursday, May 26, 2022 at St. Johns Family Funeral Home. A visitation will precede the service from 5:00-6:00pm. St Johns Family Funeral Home & Crematory in St Augustine, Florida is in charge of arrangements.

Ruth Katharine Slobody, passed away at the age of 101, surrounded by family on May 21, 2022 in St. Augustine, FL. Ruth was predeceased by her husband, Nat Slobody in 1962, leaving her a widow with seven children to raise. Her grace and dignity... View Obituary & Service Information

The family of Ruth Katharine Slobody created this Life Tributes page to make it easy to share your memories.

Ruth Katharine Slobody, passed away at the age of 101, surrounded...

Send flowers to the Slobody family.