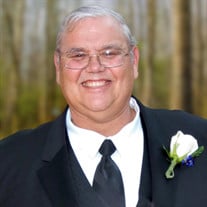 Roland Merrill Stetson II, 72, passed away August 6, 2021, at Ponce Therapy Care Center in St Augustine, Florida. He was born on December 21, 1948 in Albany, Georgia to Roland Merrill Stetson and Edith Louise (Rosenberg) Stetson. He attended Clarke School for Hearing and Speech in Northampton, Massachusetts and graduated from Albany High School before attending the University of Florida where he earned his Bachelor of Science degree. Roland then went on to further his education earning a Master of Education from Western Maryland College in Westminster, Maryland. Upon completing his degree, he began his career at the Florida School for the Deaf and the Blind where he served as a Physical Education teacher for over 35 years, coaching many sports including swimming, wrestling, basketball, volleyball, and football. Roland met and married Julia Anne Stephen, who was also a teacher the school for 30 years. They married at the Llambias House in St Augustine on November 12, 1976 and were married for 44 years. Roland was a scratch golfer and a member of the Southeastern Deaf Golf Association (SEDGA). He won many golf tournaments, including the very first SEDGA tournament. Roland also spent over 10 years as an umpire for many of the local softball leagues. He enjoyed family vacations and particularly enjoyed cruises to the Bahamas and the Caribbean Islands. Roland is described by those who love him as self-sacrificing, generous, humble, and humorous. He loved telling “Dad jokes”. Roland was a member of the Kingdom Hall of Jehovah’s Witnesses. Roland is survived by his wife of 44 years, Julia; sons Michael James Stetson, Mark David Stetson, and Matthew Kent Stetson; grandchildren, Ruby Julianna Stetson, Jordyn Lilly Stetson, Cove Andrew Stetson, James Hunter Stetson, and Olivia Grace Stetson. He was preceded in death by his parents, Roland Merrill Stetson, and Editha Louise Stetson along with an infant son, James Main Stetson. A Memorial Service will be held Saturday August 14, 2021, at 2:00 PM EST at St Johns Family Funeral Home. Covid-19 safety protocols will be in effect. Those unable to attend the services at the funeral home can view the service live streamed at https://iframe.dacast.com/b/156599/c/549019. St Johns Family Funeral Home & Crematory is in charge of the arrangements.

The family of Roland Merrill Stetson II created this Life Tributes page to make it easy to share your memories.

Send flowers to the Stetson family.