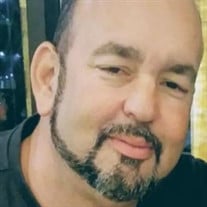 Roland Marcano, age 50, of St Johns, Florida died on May 15, 2021 at Memorial Hospital in Jacksonville. Roland was born in Miami, Florida on November 17, 1970 to Rolando and Mary Marcano. As a youth, he was very active in sports, playing football and baseball. He played Little League for Republic National Bank on a team that competed in the Little League World Series, and was accomplished in Martial Arts. He graduated from Miami Senior High School and attended Miami – Dade Community College. Roland was very intelligent and put his whole heart into everything he did in life. He had the gift of a photographic memory, remembering everything, and learned quickly. Growing up he worked for his father’s trucking company. He became a Licensed Construction Contractor, a Licensed Real Estate Agent and owned his own Mortgage Brokerage Company. He met the love of his life, Marta Nunez, on a blind date and he knew she was the one. He often referring to her as “his gift from God”. Roland and Marta were married on November 17,1993. On July 17, 2004 Roland gave Marta her dream wedding while renewing their vows. He had been a resident of Jacksonville since 2006. For many years Roland had the habit of waking early to read his bible because of his love for Jesus Christ. Of the many good things in Roland’s life, he valued his faith in Jesus, his wife and his family above all, “forsaking all others”. He was a fan of wrestling and the Miami Dolphins, and was an excellent chef. He will be missed deeply by all who knew him. He was preceded in death by his parents, Rolando and Mary Marcano. Survivors include his wife of 30 years, Marta Marcano of St. Johns, FL, a son, Rolando Augustine Marcano of St. Johns, FL, a daughter, Jessica Andrea Marcano of Miami, FL, sisters, Ivonne Dustin and her husband Richard of Goldsboro, NC, and Lisamarie Mayonet and her husband Jesus of Ocala, FL; an aunt, Dolores Marcano of Ocala, FL.; and grandchildren: Ailany, Sari, and Jeremiah. A funeral service will be held at 6 pm on Saturday, May 22, 2021 at St. Johns Family Funeral Home. A visitation, beginning at 5 pm will precede the service. In lieu of flowers, donations in his memory can be made to: The American Cancer Society, American Cancer Society, PO Box 22478 Oklahoma City, OK 73123. St. Johns Family Funeral Home and Crematory is in charge of arrangements.

Roland Marcano, age 50, of St Johns, Florida died on May 15, 2021 at Memorial Hospital in Jacksonville. Roland was born in Miami, Florida on November 17, 1970 to Rolando and Mary Marcano. As a youth, he was very active in sports, playing football... View Obituary & Service Information

The family of Roland Marcano created this Life Tributes page to make it easy to share your memories.

Send flowers to the Marcano family.