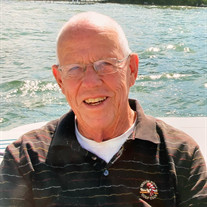 Roger Brooks Miller, 93, of Saint Augustine, Florida and Indian River, Michigan died on Sunday March 6, 2022 at the Westminster Senior Living Community in Saint Augustine Florida. Roger was born on September 26, 1928 to the Reverend Carleton Brooks Miller and Gertrude Barnes Miller in Battle Creek Michigan. He grew up in the parsonage of the First Congregational Church with two older sisters, Sally and Conny, and a younger brother Carl. Summers were spent sailing, swimming and everything outdoors at a cottage on the hill in Topinabee Michigan on Mullett Lake where his grandparents first built a cottage at the turn of the century. As a young teenager he accompanied his father on a trip through the Panama Canal. He graduated from Battle Creek Central High School in 1946 where he participated in swimming, football and tennis. He went on to swim for Michigan State College (now university) under coach Charles McCaffree, lettering all four years. In 1948 he swam in a race across the Straits of Mackinac. He came in second, noting that a great many of the field had to pull out due to the cold water temperatures, but he was used to it! As part of the preparation for the race he swam the length of Mullett Lake, over 10 miles, with his sister Conny rowing to accompany him. After graduating from Michigan State in 1950 he joined the Army for two years, spending most of his time in Germany. In September of 1951 he married the former Barbara Ford of Battle Creek. They celebrated their 70th wedding anniversary this past fall. He returned to Michigan State in 1952 and received a bachelors degree in Mechanical Engineering in 1954. Roger began his working career as a high school student loading grain on the loading docks for Post Cereals in Battle Creek. In 1954 he returned to Post and from then until his retirement in 1988 he built and managed food processing plants for Post, General Foods, then Kraft General Foods and finally Phillip Morris. His job took the family from Battle Creek to Kankakee Illinois, Westport Connecticut, back to Battle Creek, then Evansville Indiana and finally back to Connecticut. In 1988 Roger and Barbara built a home on the south end of Crescent Beach on Anastasia Island in Saint Augustine. They spent their winters at the beach in Florida and summers on Mullett Lake in Michigan for over 30 years. In 2018 they moved to the Westminster Retirement Community in Saint Augustine. Roger instilled a love of sailing, swimming, water skiing and snow skiing in his children and grandchildren. He took up rowing, windsurfing and scuba diving, anything having to do with water was fair game. He raced International 110s on Mullett Lake, and Thistles on Long Island Sound. Roger cherished his life long friendships formed on Mullett Lake in Topinabee and on Grandview Beach. Roger was predeceased by his parents Carleton and Gertrude, his sisters Sally Rausch and Conny Ashman and his son in law Stockton Miller-Jones. He is survived by his wife Barbara of Saint Augustine, his brother Carl Miller (Diane) of Vero Beach FL, sister in law Heidi Ford, his daughter Betsy Miller-Jones of Cave Creek Arizona, sons Mike (Amy)of Richmond Virginia and Mark of Mount Arlington NJ, grandchildren Anne Cotty (Chris), Todd Miller-Jones (Kirsten), Luke Miller and Julie Miller (Will Graves), three great grandchildren and numerous nieces and nephews. The family thanks Westminster Health Center, Community Hospice and Concierge Care staff members for their kindness, patience and excellent care of Roger during his final months. Services will be held at a future date. In lieu of flowers please consider donations to: Brain Support Network PO Box 7264 Menlo Park, CA 94026 www.brainsupportnetwork.org Lewy body Dementia Association 912 Killian Hill Rd. SW Lilburn, GA 30047 Www,lbda.org

The family of Roger Brooks Miller created this Life Tributes page to make it easy to share your memories.