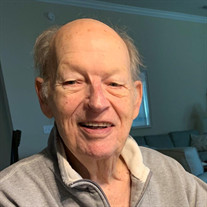 Roger William Alexander, 77, passed away January 30th at his home in St. Augustine, FL. Born in Virginia to Ernest and Virginia, he spent the majority of his years in Maryland before retiring to Florida in 2015. A graduate of the school of life, Roger spent his working years in the auto repair industry. Developing a reputation as one of the companies best employees, he worked in the body shop at Jerrys Chevrolet for an astonishing 40+ years before retiring. His ability to transform a wreck into a work of art defined his approach to most things in life. He had a passion for fixing up cars, especially Corvettes and Hot Rods and was always happy to share his wisdom of the mechanical world with those around him. Roger was a jack of all trades that could build or fix anything with his own two hands and did it well. He enjoyed working on home improvement projects including installing an inground pool for his family to enjoy, building an over the top playhouse for his daughter when she was a little girl and building an amazing detached oversized garage and workshop for himself & eldest son to work in…just to name a few. And then of course, later in life, working alongside his children, helping them on their home improvement projects. Roger was a “worker” but also took time out to have fun and go on adventures with his family. He loved RVing and took his family on countless memorable trips around the country. Disney World was also a popular vacation destination. Needless to say, he provided his children with the best childhood a kid could ask for. He will be remembered as a soft-spoken man with a generous heart, a genuine kind soul, an eternally optimistic view, and an incomparable work ethic. A man whose love for his wife & family formed the foundation of his life. A devoted husband and father, he became an anchor to those he loved. He left this world with a last wry smile, surrounded by his wife and children, at peace. Roger is survived by his wife of 47 years, Susan; daughter, Amy; sons, Robert and Cory; and 11 grandchildren, Robby, Jada, Devin, Michael, Luke, Danielle, Phoebe, Lila, Marin, Christian and Esme. He was preceded in death by his parents, and brother Harry who passed in 2020.

Roger William Alexander, 77, passed away January 30th at his home in St. Augustine, FL. Born in Virginia to Ernest and Virginia, he spent the majority of his years in Maryland before retiring to Florida in 2015. A graduate of the school... View Obituary & Service Information

The family of Roger William Alexander created this Life Tributes page to make it easy to share your memories.

Roger William Alexander, 77, passed away January 30th at his...

Send flowers to the Alexander family.