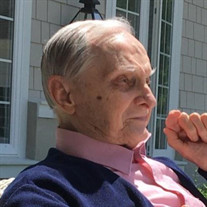 Robert Henry “Bob” Wilmering, age 97, of St Augustine, Florida passed away on March 25, 2021 at the Riverside Cottages in St Augustine. Bob was born in Toronto Canada and grew up in Toronto, Hamilton and Dundas, Canada. Through the years, he was known as Robert, Bob and even “Hey you”. He enlisted in the Royal Canadian Air Force in 1941 and served in France in the European Theater during World War II. He was wounded in action which resulted in a year long coma. In 1944, when he was discharged and returned home, his family was surprised to see him. They had previously been notified that he had been killed in action. Bob was gifted athletically and participated in many sports including snow skiing, golf, tennis, and ice hockey. He also had a gift for music and played the piano by ear. After hearing a song just one time, he could sit down and play it. Bob moved his family to Hollywood, Florida in 1960 in an attempt to improve the health of his son, Kent. For many years, he worked as a delivery driver for a uniform company. Bob moved to the St Augustine area to be near his daughter, Roberta, and was a resident of Riverside Cottages at the Shores. Bob is survived by his daughters, Kelly Smith of West Palm Beach, Roberta Runk (Chris) of St Augustine; a son, Kent Wilmering of West Palm Beach; a brother, Harold Wilmering (Jill) of Dryden, Canada and grandchildren; Tim Smith, Tyler Runk, Kyle Runk, Crystal Shirley (Mike), Emma Wilmering and Chase Fleming (Aubrey). St. Johns Family Funeral Home is in charge of arrangements.

Robert Henry &#8220;Bob&#8221; Wilmering, age 97, of St Augustine, Florida passed away on March 25, 2021 at the Riverside Cottages in St Augustine. Bob was born in Toronto Canada and grew up in Toronto, Hamilton and Dundas, Canada. Through the... View Obituary & Service Information

The family of Robert Henry Wilmering created this Life Tributes page to make it easy to share your memories.

Send flowers to the Wilmering family.