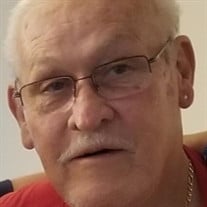 Robert A. Shilkunas, 79, passed away on May 26, 2022 at Bailey Family Care Center. He was born August 26, 1942 to Andrew (Butch) Shilkunas and Adele (Melenas) Shilkunas of the Bronx, NY. Bob proudly served in the US Navy from 1960-1964, where he was stationed in North Africa. Bob was a New York State Corrections Officer for 31 years. He and his wife Susan lived in Poughkeepsie, NY for over 30 years, where they raised their family of three children, before retiring to St. Augustine, Florida. In addition to his parents, he was predeceased by his in-laws Joseph and Anna Sartauskas, his sister-in-law Martha Burnett and son-in-law James Harding. He is survived by his wife Susan, daughters Christine Harding-Abbott, and Mark Abbott, of Litchfield, CT, Andrea and Steven McDermott, of New Windsor, NY, and son Robert and Maureen Shilkunas, of St. Augustine, FL. His niece Joann Burnett and her children, his nephew Michael and wife Liz Burnett, and his adoring grandchildren, Jacob Honig, Makayla McDermott, Robert Shilkunas Jr., and step grandchildren, Jonathan, Jason, Brandon and Christian Abbott. Funeral Mass will be held at 9am June 3rd at Corpus Christi Church in St. Augustine Florida, with inurnment following at San Lorenzo Cemetery. In lieu of flowers, donations can be made to the Knights of Columbus Council 13337 mail to: Corpus Christi Church 6175 Datil Pepper Road, St. Augustine Florida 32086.

The family of Robert A Shilkunas created this Life Tributes page to make it easy to share your memories.