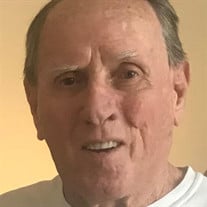 Robert Norman McLain Bob McLain, frequently described as “larger than life” by those who knew him, passed away on July 12, 2021 at the age of 85 at the Hadlow Center for Caring in Jacksonville, Florida. Born in Williamstown, MA, he was one of five siblings. Bob grew up as a child in the Berkshires and loved returning to the area for nostalgic visits. As a teen, his family moved to Southern California where he settled, married and had children. He later met his wife, Jan, and relocated with their two children to Florida where they have lived for 47 years. Bob loved his family and devotedly lived his faith in God. While dementia diminished his cognitive abilities in his final months of life, he never ceased to crave activity. Bob’s love of sports ran the gamut from running to cycling to golf, and he loved cheering the Gators and Red Sox. In recent years, he made sure to get to at least one Red Sox game in Boston each season. Friends became accustomed to the friendly rivalry based in his passion for the Gators. The words from those he touched in his life from coaching little league to Catholic youth ministry to his faith-sharing and beyond have been comforting in this difficult time. So many have spoken of his easy conversation, quick sense of humor and the feeling of acceptance from him. We are grateful for his positive influence in your lives. In 2017, Bob made the decision to donate his body to the University of Florida with the hope that his donation could further medical research. Our hope is that his donation will help to advance the treatment of dementia. Bob is survived by his wife of 51 years, Janice; son, Jeff McLain; daughter, Susanne McLain; daughter and son-in-law, Michelle and Eddie Taylor; son and daughter-in-law, Chris and Shannon McLain; son and son-in-law, Kevin McLain and Dale Tucker; sister and brother-in-law, Cheryl and Arden Colby; brother, Dean McLain; eight grandchildren, including Megan McLain, Macy McLain, Amber Boggs, Matt Johnson, Chad Taylor, Chelsea Taylor, Colin McLain and Sofia McLain; eight great-grandchildren; six nieces including Carrie McLain, Jennifer Rakis (John), Joanne Bear (Tom), Juli Baer (Greg), Nicole McLain (Michael) and Cheryl Daviau; five nephews including Dan McLain, Glenn McLain (Kim), Jack Daviau Jr. (Danielle), Kevin Daviau (Judith) and Mark Daviau; and his beloved dog, Coco. He is predeceased by his parents, Helen and Carey McLain, sister and brother-in-law, Jean and Jack Daviau, brother Carey McLain Jr. and sister-in-law Diane McLain. The family wishes to extend our heartfelt gratitude to the wonderful staff at the Hadlow Center for Caring for their kind and attentive care at the end of Bob’s life. A Celebration of Life to share love and stories in his memory will be held on August 1st at 12:30 pm at the Eagle Harbor Golf Club in Fleming Island, Florida. In lieu of flowers, donations can be made to The Trevor Project (thetrevorproject.org) or Catholic Charities (ccbdosa.org).

Robert Norman McLain Bob McLain, frequently described as &#8220;larger than life&#8221; by those who knew him, passed away on July 12, 2021 at the age of 85 at the Hadlow Center for Caring in Jacksonville, Florida. Born in Williamstown, MA,... View Obituary & Service Information

The family of Robert Norman McLain created this Life Tributes page to make it easy to share your memories.

Send flowers to the McLain family.