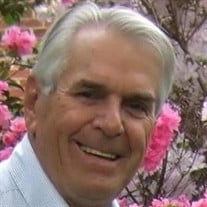 Robert R. “Bob” Lacroix, DDS, of St. Augustine, FL, passed away peacefully on Friday, January 1, 2021. He was 87. Bob grew up in Danbury, CT, the second of four children to Pierre and Albea (Lemieux) Lacroix. He was a graduate of the University of Connecticut and Georgetown University Dental School. Bob was a captain in the U.S. Army and served as a dentist in Korea before opening a private dental practice in Bristol, CT. It was there that he met Anita Fradette. They married on July 11, 1964, and began their married life in Bristol, where both their children were born. In 1975, Bob joined the VA Medical System and soon became a board-certified prosthodontist following his specialty studies at the University of Missouri-Kansas City. The family moved to Gainesville, Florida, where he worked at the VA Medical Center, served as President of the Florida Prosthodontist Association and taught at the University of Florida School of Dentistry until his retirement in 1998. Bob and Anita retired to St. Augustine, where they became active in the community and built many friendships. Bob had a lifelong love of golf and enjoyed being a member of the Men’s Association at St. Johns Golf Club. He was a parishioner of St. Anastasia Catholic Church, and he and Anita served on the board of Catholic Charities. Bob loved history and was an avid reader. He had a passion for genealogy, was a member of the local Genealogical Society and spent countless hours compiling his family history. He was most happy covered in dirt doing yardwork at his home and church, and spoiling his grandchildren with scooter rides, ice cream and powdered doughnuts. He is survived by his wife of 56 years, Anita Lacroix of St. Augustine; daughter, Michelle Knowles of Acworth, GA; a son, Marc Lacroix (Lisa) of Falls Church, VA; sisters, Georgette Tomaino of Bethel, CT and Rachel Radachowsky of Danbury, CT; grandchildren Caroline, Madeline, Andrew, Alexander & Christopher; and many nieces and nephews. He is preceded in death by his sister, Jeannine Russell. Bob was a devoted husband, father, grandfather and friend to many, and he will be deeply missed. The family would like to thank Community Hospice and the diligent help of his caregivers. A Memorial Mass will be held at 11 am on January 14, 2021 at St. Anastasia Catholic Church. The interment will follow in the Cloisters Columbarium. Those unable to attend can view the service live streamed online. The link to view the live stream is: https://saccfl.org/sacraments/funerals/ St. Johns Family Funeral Home is in charge of arrangements.

The family of Robert R. Lacroix created this Life Tributes page to make it easy to share your memories.

Send flowers to the Lacroix family.