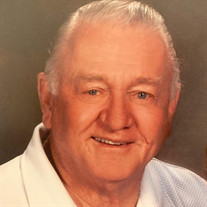 Robert (Bob) Darrell Futch, 88, passed away on Friday, August 20th at Flagler Hospital under Hospice care. He was born in Willacoochee, GA, and became a resident of St. Augustine upon returning from serving as a Staff Sergeant in the US Army during the Korean War in the early 1950’s. He retired from Prudential Insurance after 26 years of service. He was a longtime member of Calvary Baptist Church where he served as a deacon, sang in the choir and was a member of the Calvary Quartet. He assisted in establishing Moultrie Baptist Church and, more recently, was an active member of Anastasia Baptist Church, where he taught Sunday School until his health declined to the point that he was no longer able. Almost larger than life to his children, almost everyone in St. Augustine knew Bob Futch. For a number of years, he was an active member of the Sertoma Club. He enjoyed golfing, fishing, and camping. As a father, it was important to him to instill in his children to be honest and responsible, reflecting his own Christian values. He was a very generous man, always willing to help someone in need and donated to numerous charities. He was preceded in death by his loving wife of 65 years, Mary Bennett Futch; father, Troy A. Futch and mother, Evelyn Chaires. He is survived by his children, Marianne Hudson, Robert “Bobby” Futch, Jr; Jennifer “Jenny” Brown and Brian Futch (JoMarie) and one brother, Thomas Futch. He had 16 grandchildren and 20 great grandchildren. The family has decided, due to the surge in Covid cases, to forego a public memorial service. An intimate family gathering will be held at a later date at the family home. Those wishing may make a contribution in his honor to Community Hospice-Bailey Center for Caring at Flagler Hospital. St Johns Family Funeral Home & Crematory is in charge of services.

Robert (Bob) Darrell Futch, 88, passed away on Friday, August 20th at Flagler Hospital under Hospice care. He was born in Willacoochee, GA, and became a resident of St. Augustine upon returning from serving as a Staff Sergeant in the US Army... View Obituary & Service Information

The family of Robert "Bob" Darrell Futch created this Life Tributes page to make it easy to share your memories.

Send flowers to the Futch family.