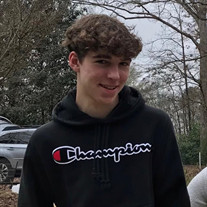 Riley Brennan Teixeira, age 16, of St. Johns, passed away unexpectedly on February 21, 2022, in St. Johns. Riley was born to Ben and Sarah (Berry) Teixeira on February 6, 2006, in Atlanta, Georgia. He moved to St. Johns with his family at a young age and attended Hickory Creek Elementary School and Fruit Cove Middle School. He was currently a member at Longleaf Church and a sophomore at Creekside High School. Riley also played lacrosse in the First Coast Crush Club Since birth, Riley displayed a high motor. His parents recall fondly his childhood love of heavy equipment and fast cars. In his early days, Riley would sit and stare at bulldozers and dump trucks at construction sites. Later he would long to drive his Grandma T’s, Corvette – a dream he sadly never realized. The little boy who could spend hours hauling dirt at Bee and Don’s in Alabama quickly turned into a young man. And with age, came new identities. A fiercely protective brother to Alex, three years his junior – they would zip through the streets of Saint John on electric scooters. Strong willed and independent, Riley made waves, not just ripples, and was commonly heard before he was seen. Maybe it was his trademark laugh or maybe it was the speaker he toted everywhere, blasting hip hop music – sometimes to the chagrin of his parents. Some of Riley’s favorite memories were made as a boy with his Pop and Nana on their farm, Rainy Hill, in Mississippi. From an early age he was a natural on the farm – tending to horses, driving equipment, and serving as a trusty apprentice. Even at such a young age, relatives noticed Riley’s work ethic, fearless nature, and willingness to help without complaint. Later, as a teen, Riley was proud to be rewarded with a promotion at Metro Diner for those same attributes. His colleagues lovingly spoke of his infectious energy and ever-present smile. His life, cut short by tragedy, is a collection of memories held onto forever by friends and family. They'll remember a young man, usually wearing fresh kicks, who can walk into a room and light it up with a grin. They'll recall his thoughtfulness and intuition - sharing his Diet Dr. Pepper or offering to ride along on an errand, just to be good company. They'll flashback to Riley in his lacrosse uniform cracking jokes before face-off. There are quiet moments, too, that will endure; like his mother reading stories and singing songs to him at bedtime. Though he had moved on from that nightly tradition, he was never too old to lie quietly beside her and their beloved dog, Winston. It’s said that a body in motion tends to stay in motion and Riley’s legacy will forever be a series of moving memories: at the beach, in the classroom, weeknight Xbox sessions and weekend hangouts. His friends will still pick up their phones, expecting a text or Snap from Riley, asking, “What’s the ‘strat?’”’ as he plans another night full of laughs and maybe, just maybe, a little harmless mischief. Riley’s candle burned bright and hot. For many, his mere presence provided warmth. Riley always started conversations by asking how you were doing; and he genuinely wanted to know. For others, Riley was a dependable lantern that could brighten even the darkest of days. The most difficult irony, for friends and family alike, is that in a time of loss and grief like this, it’s Riley they need now more than ever to lift their spirits. He was preceded in death by his paternal grandfather, Richard Barry Teixeira. He is survived by his parents, Ben and Sarah Teixeira of St. Johns; his brother Alex; maternal grandmother, Brenda Hollingsworth Dent and husband Don of Auburn, Alabama; maternal grandfather, Ted Berry and wife Dee of West Point, Miss.; paternal grandmother, Brenda Teixeira of Cocoa, Fl.; and many cousins, aunts, uncles extended family members who he dearly loved. Memorial Services will be held at 11am on Saturday, March 5, 2022, at Mandarin United Methodist Church. St. Johns Family Funeral Home is in charge of arrangements. The Teixeira family has designated these agencies for donations: mikeroweWORKS Foundation https://www.mikeroweworks.org/donate/ Saint John’s County Sheriff Department https://www.sjso.org/specialteamsassociation/ Florida Fish and Wildlife Commission https://myfwc.com/get-involved/support-fwc/

Riley Brennan Teixeira, age 16, of St. Johns, passed away unexpectedly on February 21, 2022, in St. Johns. Riley was born to Ben and Sarah (Berry) Teixeira on February 6, 2006, in Atlanta, Georgia. He moved to St. Johns with his family at a... View Obituary & Service Information

The family of Riley Brennan Teixeira created this Life Tributes page to make it easy to share your memories.

Send flowers to the Teixeira family.