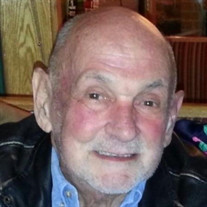 Richard Gregory Meese, at 83 years old, went home to the Lord on January 22, 2022, at Flagler Hospital in St. Augustine, Florida after a long battle with cancer, with his loving wife, Brenda at his side. He was born in Detroit, Michigan to Frank E. Meese and Hazel E. Pettit. He attended Lakeshore High School in St. Clair Shores, Michigan, and graduated from Center Line High School in Center Line Michigan. He graduated from Michigan Technical College of Mining and Technology in Houghton, Michigan to become a Chemical Engineer. Upon completing his degree at Michigan Tech, he enlisted in the Army where he was the originator of several patents, met and married his first wife, Darlene Ruth Baldwin, and began his married life in Arlington, Virginia. Greg later went on to work in private industry in the pulp and paper fields, working for Scott Paper, International Paper, and others where he developed several other patents and traveled the world as an International Research and Development specialist in the industry until his retirement. Greg was the co-developer of Viva Towels and holds a patent for their development. His first wife, passed away in 2003, and he remarried in 2007. His surviving wife is Tiffany Brenda Bonyai. He moved to Florida to join her where they settled in the St. Augustine Beach area and became active in their community. Together, they traveled to the mountains of North Carolina frequently where they enjoyed spending time by relaxing, reading, and eating in the many area restaurants in the cool air of the summer months. Greg was active in all the communities where he lived and worked. Early in his career development, he worked for the Boy Scouts of America, the U.S. Postal Service, and Detroit Edison to name a few. Greg was an editor at the Michigan Tech newspaper, a Tri-Beta Music Fraternity, the Blue-Key Honor Fraternity, The American Institute of Chemical Engineering, and the Knights of Columbus as far back as 1962. Upon retirement, he joined the Knights of Columbus Council 7121, served on several local boards, and traveled with his wife extensively. His favorite sports teams included the Green Bay Packers. Greg is survived by his wife of 15 years, Tiffany “Brenda” Bonyai; his three sons Timothy, Patrick (Tania) , and Eric (Ania), and his six grandchildren Amanda, Josh, Zachary, Samuel, Sarah, and Ava. He is further survived by four great-grandchildren. A Memorial Service will be held Friday, February 4th, at 9:00 a.m. at St. Anastasia Catholic Church. Covid-19 safety protocols will be in effect. A reception will follow at the church. In lieu of flowers, contributions can be made to the Knights of Columbus Council 7121 c/o St Anastasia Catholic Church 5205 A1A South St Augustine, Florida 32080 to benefit the local community. The service will be live streamed at the church’s webpage www.SACCFL.org by clicking on “mass schedule”. The service can also be watched on Facebook at @STAnastasia. St Johns Family Funeral Home & Crematory oversees the arrangements.

Richard Gregory Meese, at 83 years old, went home to the Lord on January 22, 2022, at Flagler Hospital in St. Augustine, Florida after a long battle with cancer, with his loving wife, Brenda at his side. He was born in Detroit, Michigan to Frank... View Obituary & Service Information

The family of Richard Gregory Meese created this Life Tributes page to make it easy to share your memories.

Send flowers to the Meese family.