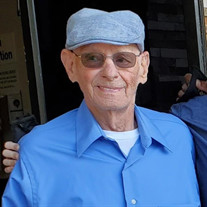 Richard Paul Hobbs, 86, resident of Saint Augustine, FL returned to the Lord on June 2, 2021. His unwavering devotion to his wife of 59 years, who preceded him in death, and his children and grandchildren, were an inspiration to all who knew him. Richard was born to the late Albert and Albertina Hobbs, in Youngstown, OH on May 19, 1935. He met the love of his life, Sally Ann Burgstaller not long after he graduated high school, and soon determined she was the one for him. They married on October 20, 1956 and were married for 59 years before Sally’s death on February 6, 2017. Richard served nearly eight years in the United States Marine Corps Reserve, and obtained the rank of Sargent. After working in the grocery industry in Ohio, the opportunity arose for him to open his own grocery store in Lakeland, FL. Gibsonia Market was the leading grocery store in Lakeland for nearly 17 years. Even though running the store took much of his time and energy, Richard still made every effort to support his children in all of their endeavors. From baseball games and cheerleading competitions, to band concerts and events at church, he always showed up! His kids were his life and their achievements were always a source of immense pride for him. After his own children had grown and had children of their own, he became a devoted grandfather and celebrated their achievements with the same enthusiasm. Richard is survived by his sons David (wife Christina) and Timothy (wife Mini); his daughters Deborah Maloney (husband Tracey) and Diana; his grandchildren Shayla, Ava, Andrew, and Gabriela; great granddaughter Arya; and his sisters Dolores and Phyllis. A memorial Mass will be held at Our Lady of Good Counsel Catholic Church in Saint Augustine, FL at 10:00 a.m. on Tuesday June 8th. Flowers for the church service and or memorial contributions to Our Lady of Good Counsel Catholic Church are equally welcome.

Richard Paul Hobbs, 86, resident of Saint Augustine, FL returned to the Lord on June 2, 2021. His unwavering devotion to his wife of 59 years, who preceded him in death, and his children and grandchildren, were an inspiration to all who knew... View Obituary & Service Information

The family of Richard Paul Hobbs created this Life Tributes page to make it easy to share your memories.

Send flowers to the Hobbs family.