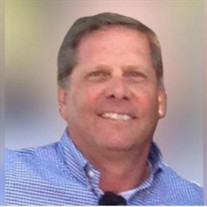 Richard (Rick) Russell Fletcher went home to be with the Lord April 13, 2021 in St. Augustine, FL. at the age of 65. Rick is survived by his wife Joyce (Ruff) Fletcher; children, Kelli (Jeff) Ridgway, Ryan (Katie) Fletcher, Tyler Fletcher; Grand children, Emily Ridgway, Carson Ridgway, Cade Ridgway, Olivia Fletcher, Rickie Fletcher, and Madison Fletcher; Mother, Helen (Jones) Fletcher; Brother, Scott (Angie) Fletcher; and a number of Nieces and Nephews. He is preceded in death by his father Richard Fletcher and brother Todd Fletcher. Rick was born August 9th, 1955 in Akron, OH. He attended Wadsworth High School in Wadsworth, OH, where he played football & baseball, and later graduated from Malone College where he also competed on the baseball diamond. He played in the New York-Penn league of professional baseball in Auburn, NY. and was inducted into the Greater Akron Baseball League hall of fame in 1996... He married Joyce Ruff on November 29, 1980. They were married 40 years and he spent years working in the cleaning industry. Rick loved the Lord and spending time with his family. He also enjoyed coaching baseball, playing golf, and spending time at the beach. He always made people laugh with his wonderful sense of humor, continuously had a smile on his face, and always made the people around him feel loved and special. The lives that he encountered throughout his life will forever be touched and he will be deeply missed by his family and friends. A memorial service will be held at 11:00 am on Saturday, July 24, 2021 at St. Johns Family Funeral Home. Those unable to attend can view the service live streamed at https://iframe.dacast.com/b/156599/c/549019. St. Johns Family Funeral Home is in charge of arrangements.

The family of Richard Russell "Rick" Fletcher created this Life Tributes page to make it easy to share your memories.

Richard (Rick) Russell Fletcher went home to be with the Lord...

Send flowers to the Fletcher family.