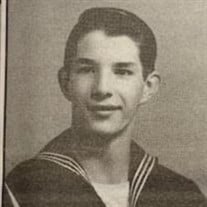 Richard Floyd Ottman, 95, a resident of Silver Treasures in St Augustine, died there on August 20, 2021. Mr. Ottman (Dickie) was born October 26, 1925, in Portland, Oregon to Floyd Ottman and Catherine (Collins) Ottman. He married Marilyn Costanzo on December 31, 2002, and moved from Annandale, Virginia to St Augustine in 2003. Dickie joined the United States Navy in 1942 at the age of 17 serving in both World War II and Korea. He was sent to Quartermaster School and achieved the rank of QM3C. Following his separation from the Navy, Dickie pursued his education and earned a BSPA from American University in 1958. Dickie had a decorated career serving the United States citizens in a variety of positions. He served the Department of the Navy as a Staff Advisor to the Assistant Secretary of the Navy beginning in 1958. He transitioned into the position of Budget Examiner for the Bureau of the Budget under the Executive Office of the President. Upon completing his role with that office he became the Deputy Assistant Director for the Office of Economic Opportunity’s “War on Poverty” program from 1966-1970. He concluded his career serving the public for 13 years as the Vice President and General Manager at the Institute for Defense Analysis (IDA). Dickie is survived by his loving wife, Marilyn Costanzo of St Augustine; daughters Sarah (Charlie) Meiburg of Chantilly, VA, and Katie (Mike) Jay of Reston, VA; stepsons, Tom (Marci) Fuller of Bristol, VA, Gregory (Marsha) Costanzo of Brooklyn, NY, and Brian (Kathy) Costanzo of Frederick, MD. He is also survived by beloved stepdaughter, Angela (Travis) Jones of Lakewood, CO, and 13 grandchildren. Private services will be held by the family at a later date. In lieu of flowers, the family requests donations be offered to Community Hospice and Palliative Care 4266 Sunbeam Road Jacksonville, Florida 32257. St Johns Family Funeral Home & Crematory is in charge of the arrangements.

The family of Richard "Dickie" Floyd Ottman created this Life Tributes page to make it easy to share your memories.

Richard Floyd Ottman, 95, a resident of Silver Treasures in St...

Send flowers to the Ottman family.