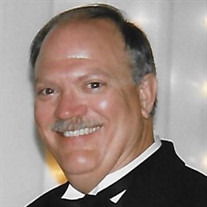 Richard Alan Blake, aged 69, went to be with the Lord on June 7, 2021. He passed at Baptist South Hospital, Jacksonville, FL. Richard was born in Belvidere, IL to Richard William and Phyllis (Balentyne) Blake. He attended St. James Elementary and graduated from Belvidere High School. Richard was an athlete who excelled in three sports: wrestling, field events in track and football. He earned a football scholarship to play at Eureka College. He also competed in discus, shotput, and javelin in college. He graduated with two majors: Physical Education and Biology. Rick worked in the financial services industry after college. Over time he advanced to marketing instruction then regional office management. Early retirement in Florida didn’t keep him busy enough so he took a “retirement” job at the YMCA. Richard was an avid deer, turkey, and duck hunter. He loved salmon fishing in Lake Michigan and spent many weeks over his lifetime lake fishing in Canada. His interest in shooting sports resulted in a comprehensive knowledge of firearms. He loved to talk so he was always ready to share his knowledge, especially with younger shooters. He was adamant about gun safety and never passed up an opportunity to speak to individuals or groups on the subject. Richard is survived by his wife of 31 years, Deidra. He is survived by one son; Brent (Jennifer) who are parents of Granddaughters Zoe, Roni and Rebekah. The family resides in Arizona. Rick’s Stepson Shawn (Sheryl) Reynolds resides in Malta IL. They are parents of Step-Granddaughter Brooklyn. Stepson Lloyd (Arlana) Puckitt are parents of Step-Granddaughter Sydney. The Puckitt’s reside in Plainfield, IL. Rick’s siblings are Carol (Edwin) Mills of Lincoln, IL; Gary (Sally) Blake of Belvidere, IL; and Nancy (Paul) Carner of Caledonia, IL. He is also survived by nephews; Michael and David; great nephews; Jacob, Wesley, Payton, Dylan, Evan, Vince, Blake, and Paul; nieces; Mindy, Marcy, Emily, Beth, and Susan; great nieces; Rebecca, Claire, Grace, Katherine, Addison, Martha, and Genevieve Richard was preceded in death by his parents and brothers-in-law, Edwin and Paul. A Celebration of Life will be held Saturday, June 26, at 11:00 AM EST. For those unable to attend, you may watch a live stream by clicking on this link https://iframe.dacast.com/b/156599/c/549019 St. Johns Family Funeral Home and Crematory is in charge of the arrangements.

The family of Richard Alan "Rick" Blake created this Life Tributes page to make it easy to share your memories.

Richard Alan Blake, aged 69, went to be with the Lord on June...

Send flowers to the Blake family.