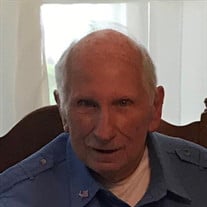 Raymond Anthony Kinney, 86, of St. Augustine, passed away September 24, 2021 at the Clyde Lassen State Veterans Nursing Home. He was born in Providence, Rhode Island, son of the late Raymond Lewis and Margaret Mary Kinney. He has resided in St. Augustine for the past year, moving here from Jacksonville, and then previously from Colorado and many other places of service. He served honorably in the United States Air Force for 20 years until his retirement. A decorated Vietnam Veteran, he servedwith the 1867th Flight Check Squadron, and the 1stMobile Comm. GP; flying many combat sorties as an EC-47 and C-140 Flight Inspection Panel Technician. He was awarded two Bronze Star Medals, one with the Valor device, Five Air Medals, the Vietnam Cross of Gallantry with Bronze Star Device, and the Expeditionary Medal for Korean service. Following his retirement he began a second career in Federal Service, retiring after a total of 43 years in service. Raymond enjoyed volunteering in many local Fire Departments and Law Enforcement functions. He served as An Arizona Ranger while stationed at Fort Huachuca. He loved the Lord and spent many years serving as a deacon. He has also been a member of Gideon’s International holding leadership positions. He desired to spread the Word of God through Bible distribution. His greatest joy was being around his family, he couldn’t resist the opportunity to tell a good joke and get them laughing. He will be greatly missed by his family and friends. Committal Service with Honors will be held at the Jacksonville National Cemetery on Thursday, October 7, 10:30AM. In Lieu of flowers the family requests donations in his memory be made to Gideons International. He is survived by his wife, Virginia F. Kinney, St. Augustine; daughters; Sandra L. Johnston (Marc), St. Augustine; Mary Jane Kinney, Valdosta, GA; brother, Harry Kinney (Marlena), California; 9 grandchildren and 11 great-grandchildren. In addition to his parents, he was preceded in death by a daughter, Laura Ann McKeithan, and brothers, Theodore and Robert Kinney. St. Johns Family Funeral Home is in charge of

The family of Raymond Anthony Kinney created this Life Tributes page to make it easy to share your memories.

Send flowers to the Kinney family.