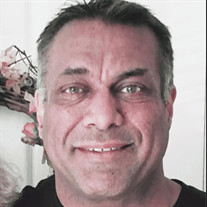 Philip M. “Phil” Hernon, Jr. passed away on August 19th at the age of 55 after decline from a long term illness. Phil was born in Cleveland Ohio on March 31, 1966 to Philip M. Hernon Sr. and Sandra Jean Pearson Hernon. Sadly his mother Sandy passed when he was only 3 months old. He then moved to Ovid NY where his grandparents took on the role of primary caregiver alongside his father Philip Sr. Shortly thereafter Phil was blessed to have a new mother takeover when his father married Cheryl (Hernon) Heller in 1968. After living in NY Phil moved with his family to many places including Marlin, TX, Fort Meade, SD and Encinitas, CA. Phil moved to Fresno, CA when he was 16 years old and attended Hoover High School where he graduated in 1984. Phil later went on to get his Bachelor's degree in Elementary Education from California State University at Fresno in 1999. After that Phil started taking classes to begin to work on his Masters Degree. Phil was very much sports oriented and active in sports throughout his life. He started snow skiing at a very young age and also played little league baseball where he excelled in catching and pitching. He also started playing tennis when he was about 12 and went on to win the North SanDiego County Tennis Championship when he was 14. Phil also played High school Basketball and Football and excelled in both. With all the sports he participated in it was Bodybuilding that ended up being the sport that would later give him his claim to fame. At the early age of 12 Phil began weightlifting when his father bought him a set of weights and from that moment on body building and Health and Fitness became a way of life for him. Through great passion and true dedication to the sport as well as many years of hard work he went on to win his IFBB pro card after placing first in the Mr.USA contest in 1995 in Denver Colorado. Phil competed for a few years in professional bodybuilding but then left that behind to focus on staying healthy and fit. This is where he found his passion in helping others achieve their fitness goals. Over the years Phil has trained a countless number of people, both online and in the gym, and has truly put his heart into helping people. He has also gained quite a following with the youtube videos he has made over the past decade. He has been known to captivate his audience with his very straight from the heart and direct approach from everything from Health and Fitness to real life issues. There were many things Phil enjoyed doing in life. In addition to participating in sports and working out in the gym he also loved to watch Football. His favorite team was the Cleveland Browns and he used to love to watch the NFL drafts each year in anticipation of Football season. Phil was very much interested in health and fitness and cooking and loved going to the grocery store and going out to dinner. He also enjoyed, watching reality TV as well as documentaries and movies, playing word games online, and spending time with his family and friends who meant the world to him. In more recent years he loved taking his youngest daughter to the gym and the park and also was blessed to be able to coach her soccer team when she was younger as well. In addition to the already mentioned places where Phil lived throughout his life, he also moved around after college and lived in other places including Seattle, Washington Phoenix, Arizona, and then onto Geneva NY where he met the love of his life Pamela (Guererri) Hernon. His quest for health led him to help others achieve their fitness goals and it was in Geneva where he decided to open his first gym called Ultimate Physique. Then shortly thereafter, in partnership with his wife Pamela, he transitioned and opened a larger gym called Finger Lakes Fitness also in Geneva, NY. In addition to the gym they also owned and managed rental properties in upstate NY as well as having their own online supplement website. Shortly after closing the gym they decided to move in 2017 to the Jacksonville, Florida area looking for a warmer climate while maintaining their rental properties in NY . More than anything Phil was a loving husband, father, son & brother who had a big heart and desire to help others. He was one of the most generous kind hearted people and will be deeply missed and remembered by many for years to come. Phil was preceded in death by his mother, Sandra Pearson Hernon. He is survived by his wife, Pamela Jean Hernon, and their daughter, Pamela Marie Hernon, both of Green Cove Springs, FL; His daughters, Jessica Mushegan (Alex) of Fresno CA, and Jordan Hobbs (Tyler) of Fresno, CA; his father, Phillip M. Hernon, Sr of Cayucos, CA; his mother, Cheryl Heller of Encinitas, CA; his sister, Joanna Owens (David); a granddaughter, Charlie Mushegan; and nieces, Julia Owens and Delaney Owens all of California. Phil also leaves behind his loving family pets, his cat Archie Hernon and his dog Hailey Marie Hernon. A private Catholic funeral service will be held at 1 noon on Friday, October 8, 2021 at St. Johns Family Funeral Home in St Augustine, FL. Entombment will follow at Jacksonville Memory Gardens in a Orange Park, FL. Those unable to attend, can view the service live streamed at https://iframe.dacast.com/b/156599/c/549019. St. Johns Family Funeral Home is in charge of arrangements.

The family of Philip M. Hernon Jr. created this Life Tributes page to make it easy to share your memories.

Send flowers to the Hernon family.