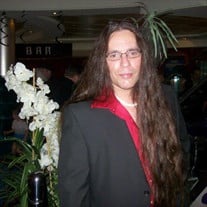 Peter John “Pete” Rivera, age 54, of St. Augustine, passed away on September 1, 2021 at Baptist Medical Center South in Jacksonville. Pete was born on April 17, 1967, in Brooklyn, New York, to Petronio “Pete” and Anita Rivera and moved to Mississippi at a young age. Pete discovered his gift for music as a young man and spent countless hours becoming a skilled musician. Specializing in Bass guitar, he toured up and down the East Coast and Southern states in the 80's and 90's with various bands such as Baby X, Thunder Alley, Wallstreet, and the Guns and Roses Tribute band Paradise City, and has opened up for such national acts as Warrant, Dream So Real, Night Ranger, and Sam Kinison who also sat in with his band. For many years he was a member of a band called The Cosmic Gypsies until leaving the band in 2010 to move to New York when he met the love of his life, Chrissy. The two married on June 25, 2013. That same year, Pete founded the band BedRock, and the band performed throughout the NY tri-state area. Pete was the consummate performer. He loved entertaining the crowd and had an awesome stage presence, multiple basses including a pretty cool Gene Simmons axe bass, his signature hats that he would change multiple times throughout a performance, and of course that amazing long hair that was always flying while he played. After recently moving to St. Augustine, he started to play venues with BedRock in Florida. Pete also worked as a heavy equipment operator for Smith Trucking in St. Augustine. He is survived by his wife, Chrissy Ricotta-Rivera of St. Augustine; daughter, Valerie Ricotta of Connecticut (Sydney); his mother, Anita Attwood (Brian) of Mazatlan, Mexico; his father, Petronio Rivera (Reslyn) of Meridian Miss.; a brother, Dino Rivera (Sandy) of Canton Ga., a ½ brother, Peter and ½ sister, Via; a sister in law, Karen Kardash (Bill); his mother and father in law, Karl and Beverly Kleinschrod; a niece, Deanna Sauls (Tommy), great niece, Davina; and Stepbrothers, Julian (Brigette), Jez (Kate) and Ady (Ali). Funeral services will be held at 1 pm on Thursday, September 9, 2021 at St. Johns Family Funeral Home. Interment will follow at Craig Memorial Park. A visitation will be held from 6 to 8 Wednesday, September 8, 2021 at St. Johns Family Funeral Home. In lieu of flowers, donations in Pete’s memory can be made to: We have your six, https://why6vet.com/get-involved/. St. Johns Family Funeral Home is in charge of arrangements.

The family of Peter John Rivera created this Life Tributes page to make it easy to share your memories.

Send flowers to the Rivera family.