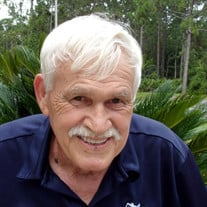 Peter Chartschlaa, 72, passed away November 17, 2021, at Community Hospice Bailey Family Center for Caring, St. Augustine, FL. He was born in LaPlata, Argentina to Platon and Antonina Chartschlaa. He graduated from Edwin O. Smith High School, Storrs, Connecticut in 1968, and Barrington College, Barrington, Rhode Island (now part of Gordon College) in 1972. Peter was a property manager in Illinois, Virginia, Maryland, and Florida. Peter was a soccer superstar during his high school, college, and post-college years. He is an inaugural member of Gordon’s Hall of Honor and Barrington College’s first honoree. He netted 144 goals over his career and led his team in scoring each year. He set a New England Collegiate record with 53 points (42 goals, 11 assists) in 1970. Post-graduation, he was awarded a tryout for the U.S. Olympic team. Peter was also featured in Sports Illustrated’s “Faces in the Crowd” junior and senior years. He played professional soccer for the Connecticut Wildcats, 1973. He lived in Florida during his semi-retirement years and enjoyed golfing, following Premier League soccer, and the San Francisco 49ers. His daughter, Dawn Alexis Chartschlaa, survives Peter; along with his brother, Paul Chartschlaa and his sisters Lidia Kozycz, Martha (George) Kohl, and Ruth (Bruce) Shenk; and nieces and nephews, Sofia, Jonathan, Phillip, Victoria, Jenniffer, Sarah, Curtis, Nicole, Aaron, Brian, Andrea, Justin, Kevin, Ish, and Amos. He was preceded in death by his parents, Platon and Antonina Chartschlaa; his brother and sister-in-law, Alex and Helena Charts. A private family gathering will be held to celebrate his life. St Johns Family Funeral Home & Crematory is in charge of the arrangements.

The family of Peter Chartschlaa created this Life Tributes page to make it easy to share your memories.