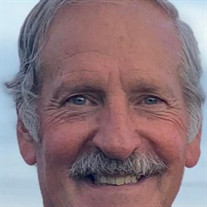 Paul Edward Kirkley, age 72 of St. Augustine, Florida, went home to be with his Lord suddenly on February 23, 2022 at Flagler Hospital of acute leukemia. He was born in Wilmington, Delaware to the late Paul and Elsie Kirkley. After graduating from the University of Delaware, Paul began to work at the Coca-Cola plant in Wilmington, where he was the manager. He continued this work in Key West and then Easton, Maryland. After serving on the board at the YMCA, he switched careers to be the Associate Executive Director at the Talbot County YMCA. After 8 years in that role, he became the Executive Director of the Dorchester County YMCA. During this period, he impacted so many children and students through coaching and mentoring. Kirkley then returned to Florida where he was the director of the Arlington Family YMCA in Jacksonville, FL. Shortly after, he found home in St. Augustine, Florida where he was the director of the St. Augustine Family YMCA. His true passion was coaching, whether it was his children or the girls lacrosse team at high school. In addition to his parents, he was preceded in death by a sister, Monica Kirkley. Paul is survived by his wife Jan Kirkley of 45 years; daughters Katie Spies (Corey) of Easton, MD; Sarah Music (Yancey) of Yulee, FL; Rebekah Andreu (Keith) of St. Augustine, FL; and grandchildren Maddison Spies, Mackenzie Spies, Georgia Spies, Audrey Spies, Lawton Music, and Emily Andreu. Paul’s most treasured accomplishment was being a devoted husband, father, and ‘Popie’. He was an amazing role model to his children and grandchildren, as well to many others, and even as adults we all still see him that way. He was always there for us through our ups and downs, and taught us to enjoy every moment life has to offer. A Celebration of Life will be held on Tuesday March 1, 2022 at 11:00am at Anastasia Baptist Church, 1650 SR-A1A St. Augustine, FL 32080.

Paul Edward Kirkley, age 72 of St. Augustine, Florida, went home to be with his Lord suddenly on February 23, 2022 at Flagler Hospital of acute leukemia. He was born in Wilmington, Delaware to the late Paul and Elsie Kirkley. After graduating... View Obituary & Service Information

The family of Paul Edward Kirkley created this Life Tributes page to make it easy to share your memories.

Send flowers to the Kirkley family.