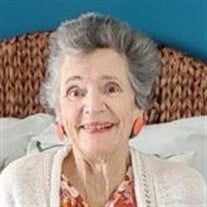 PATRICIA BURGOYNE DIMUZIO of Saint Augustine, Florida departed this earth on Wednesday, August 4, 2021. She was 85 years old. Born Patricia Ann Burgoyne on January 3, 1936 to Ann Alvera “Vera” Murray Burgoyne and Louis Allen Burgoyne, she was raised in the West Oak Lane section of Philadelphia, Pennsylvania. Pat was a graduate of St. Athanasius School, Gwynedd Mercy Academy and Fitzgerald Mercy School of Nursing. On her birthday in 1959, she married Samuel P. DiMuzio, who survives her. Together they brought five children into the world and raised them in Philadelphia and Ridgefield, Connecticut where the family moved in 1964. She retired with Sam to Saint Augustine in 1990. Pat loved nursing (practicing in hospitals and doctors offices in Pennsylvania and Connecticut), singing in the choir and worldwide travel, but her real gift was as a deeply talented actress. A true force of nature, she was most alive on stage. She played starring roles in an extraordinary number of plays including Eleanor of Aquitaine in The Lion in Winter, Martha in Edward Albee’s Who’s Afraid of Virginia Woolf?, Claire in Albee’s A Delicate Balance, Eliza Gant in Look Homeward, Angel (with Philip Anglim), Evy Meara in Neil Simon’s The Gingerbread Lady, Agnes Gooch in Auntie Mame and in so many others. Her musical roles included Mama Rose in Gypsy, the title role in Little Mary Sunshine, Mrs. Mullins in Carousel and Pitti-Sing in Gilbert and Sullivan’s The Mikado. “Her range was off the charts!” said Michael LaPolla, who directed Pat as Sissy in Come Back to the 5 & Dime, Jimmy Dean, Jimmy Dean. She was a Founder of the Ridgefield Workshop for the Performing Arts, a theatre company dedicated to excellent community theatre for Ridgefield and beyond. It was founded 56 years ago at Pat and Sam’s kitchen table and is still going strong. In addition to her acting career, which included many productions at the Ridgefield Workshop, The Southbury Playhouse, The Wilton Playshop, An Evening Dinner Theatre, Gene Frankel Studio and on ABC-TV, Pat was also an accomplished director. In addition to directing many plays and musicals throughout southern Connecticut, for 18 years (with her very dear friend and colleague, Shirley Kibbe) she directed the “big” musical every year at Ridgefield High School. Mr. LaPolla, who was also Pat’s former student, said “She made us work hard but also made the learning fun, and she made us want to work harder. She really loved acting.” Predeceased by her parents and her brother, Louis Allen Burgoyne, Jr., and sister-in-law, Alice Maguire Burgoyne, she is survived by her husband of 62 years, her children Rose DiMuzio, Louis John DiMuzio, Jeanne Marie DiMuzio Walti (Jean- Marc), Patricia Ann “Trish” DiMuzio, Ann Alvera “Vera” DiMuzio Campanella (Sean-Paul), and one grandchild, Jackson Maximilian Walti. She is also survived by three brothers and their spouses, Paul Joseph Burgoyne (Margaret Mary “Peggy” Statuti), David Anthony Burgoyne, Sr. (Catherine Marie “Cathy” Ronan), and Sidney John Burgoyne II (Jack W. Batman), and by many nieces, nephews and cousins. Graveside Service at 9:00 AM, Tuesday, August 17, 2021, San Lorenzo Cemetery, 1635 US 1 South, Saint Augustine, FL 32084 Contributions in Pat’s memory may be made to Sisters of Mercy, 515 Montgomery Avenue, Merion Station, PA 19066, www.sistersofmercy.org/donate, or to the charity of your choice.

The family of Patricia Burgoyne DiMuzio created this Life Tributes page to make it easy to share your memories.

Send flowers to the DiMuzio family.