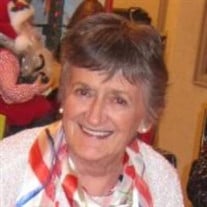 Pam Anderson, age 81, passed away on April 12, 2021 at The Bailey Family Center for Caring. Pam was born in New Rochelle, NY on April 15, 1939, to Charles Milne and Esther Magnusson. She graduated from New Rochelle High School in 1956 and went on to work as an executive secretary at IBM for 25 years. After retiring from IBM, Pam moved to Newport, RI where she lived for 10 years and worked as a tour guide for The Preservation Society of Newport County. While a resident of Newport, she began traveling extensively, both within the US and abroad with friends and tour groups. She eventually began to divide her time seasonally between Newport and Key Largo, FL before finally relocating to the St. Augustine area in 2004. While residing here, she became very involved, both within her Coquina Crossing community and locally, with numerous groups such as The Red Hat Society, the St. Augustine Duplicate Bridge Club, American Association of University Women, The Limelight Theatre, and her “Divas” from pulmonary rehab. An avid reader, she could often be found scouring the shelves of the public library and she also participated in multiple book clubs. In addition, Pam was a huge supporter of the arts in all forms: museums, opera, the symphony, and theatre, and frequented them whenever possible. Since 2018, she was a resident of Allegro Senior Living in St. Augustine. She was a loving and generous mother and grandmother and was happy to have her daughter move to St. Augustine in 2005. This enabled Pam to spend a great deal of time with her daughter, son-in-law and 2 granddaughters, as well as to participate in many of their numerous school and social activities. Pam is predeceased by her father, mother, and her 2 brothers, Peter, and Alex Milne; she is survived by a stepbrother, Ken Eklund (Margie) of Palm Desert, CA; nephews and nieces Alex, Gregory and Lindsay Milne, of NY; her daughter, Tracy Chamberlain, son-in-law Brendan Chamberlain, granddaughters Emily and Riley Chamberlain, all of St. Augustine; and a son, Dale C., of New Rochelle, NY. Out of respect for the ongoing pandemic, and in order to maintain the safety of her friends and family, a celebration of Pam’s life will be held at a later date. In lieu of flowers, donations can be made in her memory to Community Hospice & Palliative Care, or to the American Lung Association. St. Johns Family Funeral Home & Crematory is handling arrangements.

Pam Anderson, age 81, passed away on April 12, 2021 at The Bailey Family Center for Caring. Pam was born in New Rochelle, NY on April 15, 1939, to Charles Milne and Esther Magnusson. She graduated from New Rochelle High School in 1956 and... View Obituary & Service Information

The family of Pamela M. Anderson created this Life Tributes page to make it easy to share your memories.

Send flowers to the Anderson family.