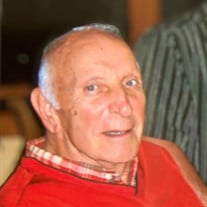 Otis Belmont ”Dutch” Devilbiss, Jr., 90, of St. Augustine passed away peacefully on June 2, 2021 at the Bailey Family Center for Caring. Dutch was born on April 2, 1931 in Union Bridge, MD to the late Otis and Lillie Devilbiss. Dutch was a graduate of John Hopkins University, with a Bachelors of Science in June of 1953. He then served two years in the U.S. Army as a first lieutenant. Dutch then worked for Bethlehem Steel Corporation from 1955 to 1980. His first assignment as a Bethlehem salesman was in Greensboro, NC. In 1967 he was transferred to the home office in Bethlehem, Pa, and two years later he was assigned the position of district manager in the Atlanta, Ga. office. After several years there he was transferred to the Jacksonville, Fl. office where he retired from Bethlehem and remained in Jacksonville for forty four years. After retiring from Bethlehem Steel he pursued a career as a real estate broker. He enjoyed playing golf in his leisure time and traveling the world with his wife Carol . He was an antique car enthusiast, owning several cars and attending car shows. With his witty, but dry sense of humor, Dutch always used his “ sales talent “ to gain many friends who always kept in touch even after he retired. . Dutch was a hard working dedicated family man who will be missed dearly. Dutch is survived by his wife, Carol of St. Augustine; his children, Tracie Johnson (Larry) of Tallahassee, Fl, Gail Holroyd(Greg) of Charlotte, NC, and Mark Devilbiss of Tuscon, Az.; sister, Marlene Johnson(Lee) of Tallahassee, Fl; 5 grandchildren and 5 great grandchild. No services are planned at this time. St Johns Family Funeral Home is in charge of the arrangements.

The family of Otis B. "Dutch" Devilbiss Jr created this Life Tributes page to make it easy to share your memories.

Send flowers to the Devilbiss family.