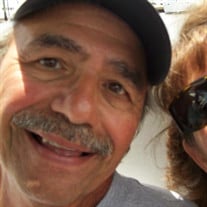 Michael Francis aka Michael Anthony Vendetti aka Mike 5/26/42 to 6/8/22 St Augustine, Florida Mike Vendetti died in his home battling cancer. Mike was proud of his ability to make one can of baked beans last for what seemed a lifetime and to have an extensive collection of fishing knives and rods so he didn’t have to rely on working to eat. You know, teach a man to fish and all that. Dad was a ladies man who loved buying sneakers that he also loved to complain about and return. In fact his family counts no less than 15 pairs of sneakers still in their boxes and lamented he didn’t have enough time in this life to return them and complain about the next 15 pairs. Dad loved baseball and deftly led the little league team he coached in NJ to 22 winning seasons. He didn’t believe in crying in baseball and that brought him and his team to glory after glory. Mike worked relentlessly at the Philadelphia railroad for 42 years and told increasingly cornier dad jokes as he aged. The jokes became especially distasteful when he retired 20 years ago and became a full-time fisherman and ladies man but you can't blame a hard-working guy who raised 4 beautiful children for letting it all hang out near the end. Mike was fiercely proud of his collection of what he called “shit heaps for cars” that he paid no more than $500 dollars each for in some sketchy Camden neighborhood when his children were still living in the house and took quiet pride in his children learning to drive in the “blue fendered otherwise white car" that his kids and wife (deceased) literally had to stand on the brakes and pray for them to work. “Now my family's prepared for anything on the road” he would say and he was right. To this day none of his family have had car accidents despite many attempts. Dad loved and stayed with his wife Joan for over 55 years (way to go, Dad!) and begrudgingly helped with household chores. Unfortunately, much to his chagrin, his wife had a penchant for gardening and would sweet talk him into digging holes in the garden for all new plants every year in the 100 degree Florida heat for the last twenty years. What a trooper! As for his children, Mike was secretly proud when his youngest daughter Jackie got pulled over going 70 in a 40 zone with her father in the car and charmed her way out of the ticket with a short skirt, tall boots, and a smile to die for. Maybe one of his proudest moments. He was also extremely proud of his second born daughter, Cindy, who became a nurse and helped so many people but passed to the other side at the young age of 30 from cancer and left the world a much better place than she found it. He was also proud of his eldest daughter Michelle and all her children (Nikki, Jimmy) and their children (Elliot, Oliver, BenJen, Bella). He was also proud of his only son Mike for his talent in baseball, music, humor and his killer smile. Unfortunately, both of their male egos and stubborn personalities would play a part in their relationship causing a love that only a father and son would understand. Mike loved his many cousins (he was Italian so there were many) and adored his mother Joesphine(deceased), his sister Grace Marie (deceased), and her children Lisa (deceased) and his nephew Sal who was his best fishing buddy and lover of cars, trucks, jokes and beer. Mike was also happy to be a father figure for his favorite adopted grandson Gavin who lapped up all of Mike's charms and learned to dish it out as well as Mike. Mike loved his life partner, Juno, who he got to travel, fish, laugh, and found his peace with. What else is there? In lieu of flowers Mike would like it if you could donate to cancer research as ultimately he wants everyone to be able to smoke like a chimney and not have to worry about pesky cancer. You can donate here: https://donate3.cancer.org/

Michael Francis aka Michael Anthony Vendetti aka Mike 5/26/42 to 6/8/22 St Augustine, Florida Mike Vendetti died in his home battling cancer. Mike was proud of his ability to make one can of baked beans last for what seemed a lifetime and... View Obituary & Service Information

The family of Michael Francis Vendetti created this Life Tributes page to make it easy to share your memories.

Send flowers to the Vendetti family.