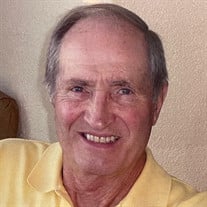 Michael Raymond Fowler, age 87, of St. Augustine, Florida, passed away January 22, 2022 at the Community Hospice for Caring at the Baptist South Medical Center. After over a decade of fighting myleofibrosis bone cancer, his body succumbed to the impact of this disease. He and his family appreciate the excellent efforts of so many in the medical field. Michael was born in Southampton, England and grew up in London during WWII. He went to school passing friendly US soldiers on the streets of London. He walked around the ruble from the previous night’s bombing. Schooling did not stop in London for anything! Perhaps that is also why Michael grew up with a real sense of bravery and a practical view of life. Perhaps that also contributed to his caring, compassionate and kind personality. He did not worry about unimportant matters. He met every person and situation with a positive attitude. Michael believed in the best capabilities of mankind. After graduation from public schooling in London, he joined the RAF. The war was over, but he was inspired by all that had occurred in his childhood and the bravery of the Royal Air Force. He joined the RAF and spent significant time in Moosejaw, Canada with NATO training programs. Once in North America, he was able to visit the USA. This enhanced his desire to become an American. In 1956 Michael immigrated to the USA and soon brought his Mother to live here, too. His Dad had died during the war. His first job was with Eastern Airlines where he had the opportunity to train as a computer programmer and was a part of the team that built the first on-line airline reservation system. This opportunity led to a lifetime of exciting and highly responsible positions in the Information Technology field. Michael was recruited by Johnson and Johnson to build out their international IT function. In future years, Michael moved to Smith Kline and French, where he led the Corporate IT function. He also served in the Executive role for Information Technology for MacMillian , the publishing company, where he built many lasting relationships. He was part of a special and unique group of people who facilitated the birth of the modern age of IT. He was a trail blazer! . In addition, Michael would remind you, that his move to Johnson and Johnson introduced him to the love of his life, his wife, Jean Martin Fowler. When he finally retired, he bought a small plane, renewed his pilot license, and he and Jean traveled many places, including their first trip to Florida. Michael found the time to pursue a Bachelors Degree from Pace University, and was sponsored by Johnson and Johnson for the Executive MBA Program . However, he counted his greatest accomplishment “his family”. This includes his forever sweetheart, Jean and also his sons Brian Fowler and wife Lillian; Guy Fowler and wife Theresa; and Colin Fowler with wife, Colleen. This expanded family includes grandsons Justin, Devin, Ryan, Chris, Tyler, Corey, Logan and Brandon. Three great grandsons are already a part of this legacy! Michael and wife Jean believed that the good Lord brought them together and has had an influence through their lives. As Michael passed on, he was surrounded by many members of his larger family. He always believed that he would see his family again in heaven. A service celebrating Michael’s life will be held at 1 PM on Sunday, February 6 , 2022 at St Johns Family Funeral Home with Rev. Jim VandeBerg officiating. Arrivals may begin at 12:30PM. Those unable to attend in person can view the service live streamed at https://iframe.dacast.com/b/156599/c/549019 . In lieu of flowers, donations in his memory can be made to the Community Hospice of NE Florida, 4266 Sunbeam Road, Jacksonville, Florida 32257. The family is inviting visitors to join them immediately after the service at Slammer and Squire, Legends Grill inside World Golf Village. There will be a light buffet, beverages and a short, but special presentation prepared by his sons all about the life of this remarkable man. St. Johns Family Funeral Home is in charge of arrangements.

Michael Raymond Fowler, age 87, of St. Augustine, Florida, passed away January 22, 2022 at the Community Hospice for Caring at the Baptist South Medical Center. After over a decade of fighting myleofibrosis bone cancer, his body succumbed to... View Obituary & Service Information

The family of Michael Raymond Fowler created this Life Tributes page to make it easy to share your memories.

Send flowers to the Fowler family.