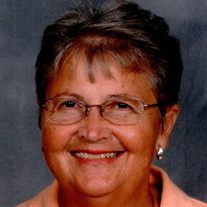 Marlene Fawn Darbyshire, age 83, of St. Augustine, Florida died October 17, 2021, at Bailey Family Center for Caring. Marlene was born August 11, 1938, in Kansas City, Missouri to Walter Henry and Millie Marie (Hulsey) Hecker. Marlene grew up in Chicago, Illinois and Des Moines, Iowa before she and her husband of 60 years Homer “Darby” Darbyshire moved to Kansas City, Missouri where she raised her family. Darby and Marlene would share their time between homes in Lake Winnebago, Missouri, Harlingen, Texas, and Palm Coast, Florida after their children had grown. Marlene graduated with her Bachelor Degree in Applied Arts from Iowa State University and placed her career on hold in order to be a homemaker. Once her children were a bit older, she embarked on her career as an Interior Designer and Decorator. She was a gifted artist and spent her leisure time doing arts and crafts, painting, stained glass, silversmithing, and was a talented seamstress. She and Darby loved cruises and visiting Hawaii having visited the state 16 times. Marlene was an active member of her church and served the Episcopal Church as a member of the Alter Guild. She was also a member of the Beta Sigma Phi Sorority and the Red Hat Society. Marlene is survived by her husband of 60 years, Homer F. “Darby” Darbyshire of St Augustine; daughter, Sondra Marie Tucker (Dennis) of St Augustine; son, Douglas Eugene Darbyshire of Overland Park, Kansas; grandchildren, Brittni Tucker, Jacob Darbyshire (Mackenzie), Margaret Darbyshire, Gavin Tucker, Michael Darbyshire, and William Darbyshire; great grandchildren, Charlotte Patzwald, and Quinn Darbyshire; brother, Howard Walter Hecker (Nancy) and other family members and friends who will miss her dearly. She was preceded in death by her parents. The family will hold private services at a later date. In lieu of flowers the family requests donations be made to either The Parkinson’s Foundation c/o St Augustine Rehabilitation Specialists (ST.A.R.S.) for their work with Parkinson’s Disease or to Bailey Family Center for Caring-Community Hospice. St. Johns Family Funeral Home is in charge of arrangements.

The family of Marlene Fawn Darbyshire created this Life Tributes page to make it easy to share your memories.