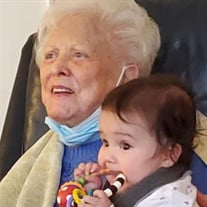 Marjorie June Goodall, age 87, of Palm Coast, passed away peacefully on December 10, 2020 at her residence with family at her side. Born and raised in Alum Creek, West Virginia, she was a 1951 graduate of Washington District High School. She joined the US Navy right out of high school and served during the Korean War. While she was married to her first husband, Charles IT McDowell, Marjorie worked a variety of jobs in many places as they moved to new duty post following his military career. For many years Marjorie worked as a Budget Analyst for the Civil Service, retiring in 1997. She had been a resident of Palm Coast for more than 30 years. After the death of her first husband, a chance encounter re-connected Marjorie with childhood friend and schoolmate, Robert “Bob” Goodall. It was thought in earlier days that Marjorie and Bob were destined to be married, and on August 16, 1998 those foretelling’s became reality. Marjorie and Bob enjoyed their retirement traveling, and spending time with their children, grandchildren and great grandchildren. Marjorie was a longtime member of Crescent Beach Baptist Church. She is survived by her husband, Robert "Bob" Goodall of Palm Coast; a daughter, Edith Stoddard of Highland, Utah; sons, Garry McDowell (Kathy) of Holbrook, Arizona, Roger McDowell (Cathie) of Snowflake, Arizona, Charles McDowell (Sharon) of Winter Park, FL.; four loving stepchildren; sisters, Hazel, Nona & Ruth; and brother, Forrest, 25 Grandchildren and 58 Great Grandchildren. A private committal service with military honors will be held at Jacksonville National Cemetery. A memorial service will be held at Crescent Beach Baptist Church at a later date. St. Johns Family Funeral Home is in charge of arrangements.

Marjorie June Goodall, age 87, of Palm Coast, passed away peacefully on December 10, 2020 at her residence with family at her side. Born and raised in Alum Creek, West Virginia, she was a 1951 graduate of Washington District High School. She... View Obituary & Service Information

The family of Marjorie June Goodall created this Life Tributes page to make it easy to share your memories.

Send flowers to the Goodall family.