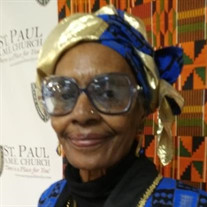 Tribute to Margaret “Peggy” Williams May 22, 1945 – December 16, 2020 Margaret “Peggy” Williams was born in Philadelphia, lived in Providence, Rhode Island (1975 to 2005) and died in St. Augustine, Florida. She was the oldest of two children born to Robert Williams and Bernice Davenport. In 1975 she moved to Providence where she worked at the Rhode Island State Department. A Rhode Island College, United States Post Office, and Amos House Women’s Shelter. Her last job was with the Prescription Program in Marianna, Florida. Peggy was charismatic, passionate, and projected positive energy. She had a flair for mixing and matching bright colors and contrasting shapes. This talent was displayed in fashion and home décor. When she walked into a room, you were attracted to her energy. The stage was her home. She performed in “To Kill A Mocking Bird” (Harper Lee) at Rhode Island College, in “Black Masque” (George Houston Bass) and “Lizzie” (Ray Arana) at Brown University, Rites and Reasons Theatre, and also in two casts of “Conversions with Women I Have Known, About Men They Have Known” (Lloyd Shelton Johnson) in Marblehead, Massachusetts and Providence, Rhode Island. Sunday dinner gatherings in her home attracted poets, musicians, artists and friends from all walks of life. There were always musical instruments – the thumb piano, talking drum, Shekere, tambourines, and sticks - to play in celebrations of life. She was a member of Kujichagulia, a group of African American poets and storytellers. She is renowned for her performance at the Annual Langston Hughes Poetry Festival for the poem “When Susanna Jones Wears Red” and Peggy’s memory burns in our hearts like “a love-fire sharp like a pain”. She is preceded in death by her father, Robert Williams II, mother Bernice Davenport, and brother, Robert Williams III. She is survived by two sons Bryon Williams and Che Gallman (wife,Yvonne), her siblings: Robert Williams III (Mattie), Herbert Smith (Virginia), Deborah Savage, and Ronald Williams; grand children (Shanell, Courtney, Jacquelyn; step mother Mary D. Williams, nieces and nephews and many friends in Pennsylvania, Rhode Island, Massachusetts and Florida. With sincere gratitude for your kind expressions of sympathy at the death of my beloved mother. A memorial service in Providence will be announced in the future post COVID-19.

The family of Margaret "Peggy" Williams created this Life Tributes page to make it easy to share your memories.

Send flowers to the Williams family.