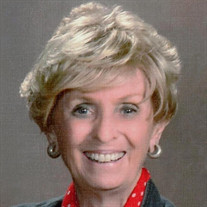 Margaret Anne Bagg, 83, of St. Augustine, Fla., went home to the Lord on Nov. 4, 2021, with her family by her side. She was born to the late Frank Doyle and Laura Griffin Doyle, July 17, 1938, in Albuquerque, N.M. Margie graduated from Highland High School in 1956 and attended one year of college before entering the workforce as an administrative assistant to the Air Commander at Kirtland AFB and later Trans World Airlines in international and domestic travel. She married John Bagg in 1966, and they lived together in Albuquerque for 19 years before relocating to St. Petersburg, Fla., in 1985. In 2015, they moved to St. Augustine to be closer to family. And while Margie was a devoted wife, mother, and grandmother, she was also a very accomplished realtor in the Albuquerque residential sales market. She changed careers to spend more time with her family and worked as the office manager for several medical practices in Albuquerque and St. Petersburg. In 1990, Margie launched an antique business in downtown St. Petersburg – First National Antiques and Lamps – before retiring due to health. She was an accomplished actor and dancer, performing for the Albuquerque Little Theater and other stage and film productions. Before moving to St. Augustine, Margie spent much of her time volunteering at Blessed Trinity Parish and the St. Petersburg Museum of History. She also loved traveling with her husband, John and their motorhome group, visiting 49 states and 8 Canadian provinces. Margie is survived by her husband, John, and their five children: Kathleen Bagg of St. Johns, Fla., Timothy Green of Roanoke, Va., Laura Bagg-Rosenthal (Paul) of Sun Prairie, Wis., Eileen Bagg-Rizzo (Keith) of Santee, Calf., and Lori Levy (Alex) of Pasadena, Calf. She is also survived by 11 grandchildren and two great-grandchildren, her brother Bruce Doyle and his wife Patricia of Colorado Springs, Colo., her sister-in-law Sue Foreman and her husband Steve of Orlando, Fla., two nephews and three nieces. She is preceded in death by her parents and two brothers, James Patrick and Francis “Mickey” Doyle and his wife Alice of Albuquerque. A funeral Mass will be celebrated at 10 a.m. on Nov. 23 at St. Ambrose Catholic Church in Elkton, Fla. Interment will follow at San Lorenzo Catholic Cemetery, St. Augustine. A reception will be held at 1:00 p.m. at the Coquina Crossing Clubhouse, 4536 Coquina Crossing Dr., Elkton, 32033. St Johns Family Funeral Home & Crematory is in charge of arrangements.

Margaret Anne Bagg, 83, of St. Augustine, Fla., went home to the Lord on Nov. 4, 2021, with her family by her side. She was born to the late Frank Doyle and Laura Griffin Doyle, July 17, 1938, in Albuquerque, N.M. Margie graduated from Highland... View Obituary & Service Information

The family of Margaret Anne Bagg created this Life Tributes page to make it easy to share your memories.

Send flowers to the Bagg family.