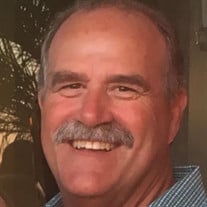 Marcus Lawrence Weaver, Jr., age 63, of Ponte Vedra Beach, FL., passed away peacefully with his family by his side at the Alice and T. O’Neal Douglas Center for Caring in Jacksonville, FL., on October 13, 2021. Marcus was born on November 17, 1957 to Marcus Lawrence and Thelma (Partin) Weaver in West Palm Beach, FL. Marcus, known as Marc in his youth, grew up in Ocean Ridge, FL. At a young age, he learned an invaluable work ethic from his father, a Florida cattle rancher, dairy farmer, and member of the pioneer Weaver family. Marcus attended Principia High School, a Christian boarding school in St. Louis, MO. After graduating, he attended Principia College before completing his education at Florida Institute of Technology in Jenson Beach, FL. where he studied Ocean Engineering and Offshore Marine Technology. In 1978, Marcus began his career with Dowell Industrial Services, a Division of DOW Chemical Co., servicing oil wells in the Gulf of Mexico. Marcus was a natural leader and was quickly promoted to supervise employees with many different strengths and backgrounds. His charisma made everyone feel they mattered and their position was equally important in completing the job at hand. Marcus was well loved and respected by the customers and employees that he worked with. His intelligence in mathematics and chemistry led him to become the Safety and Training Manager for the V.P. of Dowell Industrial Services. Later in his career he played key roles as Service Supervisor Manager for Hydrochem’s Jacksonville Branch, National Sales Manager Specialist for Utilities for Hydrochem, and Regional Sales Manager for Violia in 2010. Marcus met the love of his life, Karen Wilson, while in college on a scuba diving trip. He married Karen on May 26, 1979, in Kennebunkport, ME, where Karen’s family had a summer home. Marcus and Karen began their married life in Thibodaux, LA and Houston, TX and eventually raising their family in Orange Park, FL and then Tampa, FL. He had been a resident of Ponte Vedra Beach since 2004. A descendant of Lyman Hall, an original signer of the Declaration of Independence, Marcus had keen interest in American History. He was a proud member of the Sons of the American Revolution. As an avid reader, he was proficient in communicating historical knowledge in a captivating manner. Marcus led a full and active life centered around Karen, his daughter, Jennifer, and son, Marcus. He loved scuba diving, boating, fishing, and spending time with his grandsons, family, and friends. He was a man of faith and attended Grace United Methodist Church. He is survived by his wife of 42 years, Karen Weaver of Ponte Vedra Beach, FL.; a daughter, Jennifer Weaver Marek (Joseph) of Saint Augustine, FL.; a son, Marcus Arthur Weaver (Ana) of St. Petersburg, FL.; a sister, Lois Argo of Altamonte Springs, FL.; grandchildren, Andrew Lawrence Marek and Marcus Arthur Weaver, Jr.; and a niece, Ashley Argo of Dallas, Texas. A celebration of Marcus’ life will be held at 11:30 am on Saturday, November 6, 2021 at Grace United Methodist Church with Rev. Carolyn Williamson officiating. In lieu of flowers, donation in Marcus’ memory, can be made to the Pancreatic Cancer Action Network at www.pancan.org/donate or mail at 1500 Rosecarns Avenue, Suite 200, Manhatten Beach, CA 90266 St. Johns Family Funeral Home is in charge of arrangements.

Marcus Lawrence Weaver, Jr., age 63, of Ponte Vedra Beach, FL., passed away peacefully with his family by his side at the Alice and T. O&#8217;Neal Douglas Center for Caring in Jacksonville, FL., on October 13, 2021. Marcus was born on November... View Obituary & Service Information

The family of Marcus Lawrence Weaver Jr created this Life Tributes page to make it easy to share your memories.

Send flowers to the Weaver family.