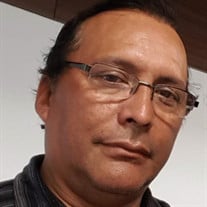 Marcos Rodriguez – Paz, age 55, of Miami, Florida, died unexpectedly May 1, 2021 at Jackson North Hospital Miami. Marcos was born in Central America in the beautiful country of Honduras where he grew up in a large family of many brothers. As a youth, he enjoyed soccer, and was an avid fan of the sport for his entire life. An accomplish student, he attended the Air Force Academy in Honduras where he studied accounting and served in the Honduras Air Force as a helicopter mechanic. Marcos was equally gifted with intelligence and knew how to work with his hands. He excelled as a mechanic and carpenter and especially enjoyed working in construction. At the age of 23, he immigrated to the US and settled in Houston, Texas where he worked in construction. In 2006 he relocated to Miami, Florida. As a mechanic he had a passion for fast cars, and was also musically talented, singing and playing the piano when he had the opportunity. He was a member of the Evangelical Church for much of his life. More than anything, Marcos was a loving husband, father, brother and friend to many and he will be deeply missed. He is survived by his wife, Elvira “Vila” Andino of Honduras; sons, Marcos Rodriguez and his wife Vivian of St. Augustine, Marvin Rodriguez and his wife Janet of Jacksonville, Jessy Martinez of Honduras, Victor Martinez and his wife Jesenia of Virginia; brothers, Luis Suazo, Ruderis Elvir, Martire Rodriguez, Zoila Calderon, Rosa Garcia, Ana Garcia, Julio Garcia, Franklin Garcia; and 11 grandchildren. Funeral services will be held at 9 am on Saturday, May 8, 2021 at St. Johns Family Funeral Home. Interment will follow at San Lorenzo Cemetery. A visitation will be held from 1 to 3 pm, and from 8 to pm on Friday, May 7, 2021 at St. Johns Family Funeral Home. Those unable to attend can view the service live streamed at https://iframe.dacast.com/b/156599/c/549019 St. Johns Family Funeral Home is in charge of arrangements.

Marcos Rodriguez &#8211; Paz, age 55, of Miami, Florida, died unexpectedly May 1, 2021 at Jackson North Hospital Miami. Marcos was born in Central America in the beautiful country of Honduras where he grew up in a large family of many brothers.... View Obituary & Service Information

The family of Marcos Rodriguez - Paz created this Life Tributes page to make it easy to share your memories.